The Last Bison
Travis Hayes
The Minnesota Child
The Last Bison rose from the marshes of southeastern Virginia to captivate the national music scene with a rare blend of music that NPR dubbed, "Classical influenced southern folk rock." Having drawn comparisons in the past to indie superstars the likes of Mumford & Sons, The Decemberists, and Fleet Foxes, their VA project harvested a more dynamic, and anthemic sound from the soil of their folk roots. The addition of electric bass and keyboards to their extensive collection of acoustic instruments gave them a more dynamic, driving sound. With their most recent work SÜDA, Last Bison have stampeded down from the mountaintop and landed in the wild lands, where they inhabit world rhythms, ambient oases and crystalline stone-cathedrals with music that echoes out into the night.

If Travis Hayes' debut album, Young Daze, captured the wistful optimism and possibility of youth, his second, Sleepless, is the sound of finding the strength to stand up after life has slammed you into the concrete one too many times. The album, written after the sudden death of a dear friend, encompasses what it is to be alive: the joy of love, the agony of loss, the terror of embracing hurt, and the ultimate release of healing. Sleepless is the sound of shedding one scarred and fractured skin, in order to crawl into another, stronger one. But for all its sadness, Sleepless is ultimately marked by a deep sense of hope; the will and desire to keep moving forward, even in the shadow of grief. "In the end," Hayes says, "these were more than just songs. They saved my life."

The Minnesota Child blends soulful melodies, stirring lyrics, and intricate harmonies to produce a lush indie folk/pop sound that inspires and connects listeners. Led by singer, songwriter, and guitarist Ethan Buckner and his brother, drummer and produced Matt Buckner, TMC creates an expansive and symphonic sound reminiscent of Paul Simon, Ben Howard, and The Head and the Heart. In February 2018, TMC made its formal debut as a full band headlining Great American Music Hall in San Francisco. Their brand-new record, Fireflies, is "a life affirming, joyful collection of songs that find the beauty in both the dark and the light" 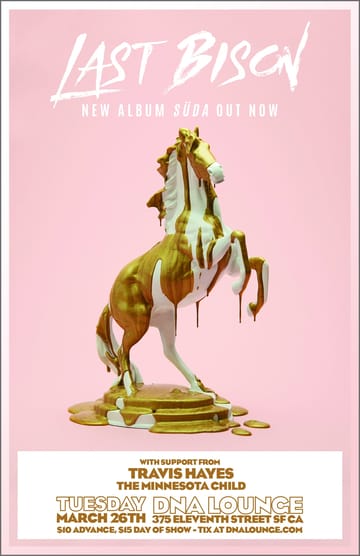