Spear Of Destiny
The Ink Bats
Established in 1983 by singer and songwriter Kirk Brandon and bassist Stan Stammers, Spear Of Destiny has had an ever-changing line-up through the years. They plays a punk-influenced form of power rock, which often had an anthemic feel. the band began achieving some chart success and staging sell-out concerts, including a support slot to U2 at Wembley Stadium. However, ill fortune struck on the eve of the band's appearance at the Reading Festival, as Brandon contracted Reiter disease which obliged the band to put all their plans on hold for nearly a year. Spear of Destiny have had 10 UK Singles Chart entries. Four reached the Top 50 but only one made the Top 20 - "Never Take Me Alive" (1987).

The Ink Bats are a post-punk/psych/goth-influenced band based in Oakland, California, featuring Rodney Horihata (ex-Chrome) on lead guitar, Andrej Puhlovski on drums and vocals, Zo Guthrie on keys and vocals, Davey Bones (Dead Souls) on bass and Josie Dot on rhythm guitar and vocals 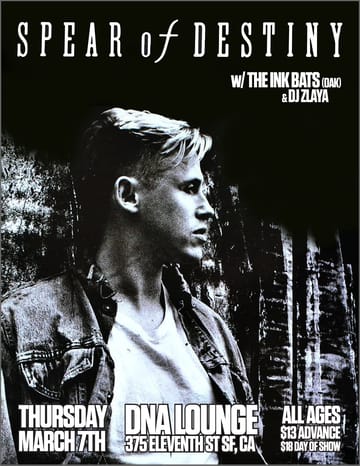 Spear of Destiny: The Wheel
The Ink Bats: No Other