Wirdowe
Joey Caruso
Paul Leath
EastBay Jay
Kidclark
Mack Lino
Jerry Chiu
From the people who bring you the annual Pisces and Libra parties, Pisces Music and Entertainment Portal in association with PLUR Alliance introduce the latest chapter in their growing series of zodiac events, Aquarius! Join us on Saturday, February 2nd to celebrate the birthdays of your favorite Aquarius electronic music producers and DJs.

PENTA is Russian-born psytrance producer Nikita Tselovalnikov who has been making music since 1988. Nikita has earned the reputation as one of the pioneers and innovators of psytrance and his hard work has brought him bookings in over 35 countries around the world. These include regular performances at major festivals like Boom, Ozora, Universo Paralello, and Burning Man to name just a fraction. Penta's unique and futuristic sound has brought together people of different scenes into one swirling psychedelic dance. His performance at Aquarius will feature many new productions that will find their way onto his upcoming album released later this year. Treat this night as an exclusive listening party to unreleased music by the master himself.

LIAM SHY is one of the original Tantra SF resident DJs. Not only was he responsible for helping organize many of the legendary Tantra events, but his sets opened minds and made new fans of the exploding full-on psytrance sound that has been growing ever since. Liam's set is sure to draw from these experiences and perhaps even introduce the next wave of music to the trancers and dancers of San Francisco.

WIRDOWE, known to his close friends as Glen Bitter, is not only one of Southern California's most underrated breaks and drum & bass DJs, but he is also the CEO and founder of Underground Sound. Underground Sound is responsible for many of Southern California's more memorable parties including the annual Perception Festival, an outdoor event that has been going strong for over 17 years! For Aquarius, Wirdowe brings to the DNA Lounge an infectious SoCal sound that makes all partiers down south groove and dance wildly.

Along with our special guests, we've selected the best Aquarius DJs to convey the perfect flow of music for a great experience from start to finish. In the main room, we take a trance journey beginning with progressive to full-on psytrance to dark psy. The second room will feature house, techno, and breaks delivered to you by many of the brightest starts in our local dance scene. Musically, they are all connected by the funk, and like a constellation, the connection creates a bigger audio picture! 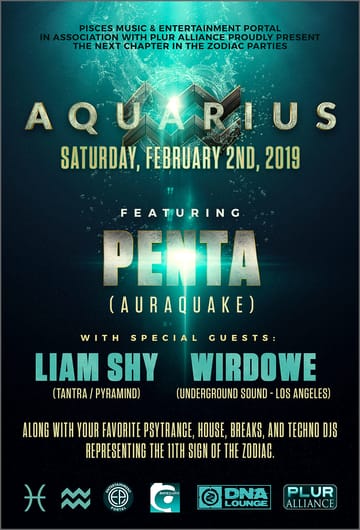