Skating Polly
Potty Mouth
Burd
Skating Polly is a sister duo from Oklahoma raised on '70s punk and early-'90s alt-rock. Their sophomore album, Lost Wonderfuls, was produced by Exene Cervenka of X and mixed by Kliph Scurlock of The Flaming Lips. Skating Polly takes a minimalist approach to songwriting, with the two largely self-taught musicians, crafting super-catchy melodies. Along with earning the adoration of Cervenka, Skating Polly has found fans in Rosanne Cash and Sean Lennon, taken the stage with punk legends like Mike Watt, and opened up for such indie heavy-hitters as Deerhoof and Band of Horses.

Potty Mouth don't just shake the foundation of guitar rock, they inject it with attitude. Starting out playing the Ladyfest-aligned basement scene while also transcending it, they have gone on to recently be the main support for The Go-Go's. Dreamt up at Smith College, in Northampton, Mass., bassist Ally Einbinder and drummer Victoria Mandanas had already played the punk scene, allowing Potty Mouth a driving energy, while Phoebe Harris, also a visual artist, didn't own a guitar. Abby Weems, a recent high school grad, fronted the band with deceptively simple lyrical play-- her Liz Phair-style monotone being clear and literal, underscoring the direct quality of their pop-punk poetry. At times the guitars weave like early post-punk, but Potty Mouth's upbeat surf fuzz could be likened to any number of fast, barebones 70s and 90s punk bands who learned as they went. Buzzcocks, Jawbreaker, or maybe even Excuse 17 are all in there. 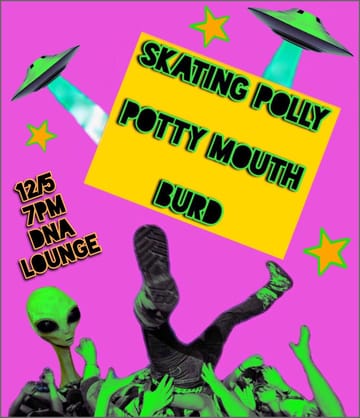