BYOAS (Bring your own art supplies)

We're excited to announce that we will be closing out the Dr. Sketchy's year with fan favorite models, the Cobra 1st Legion!

Featured for our LAST EVENT OF 2018 will be multiple models as popular G.I. Joe villains and heroes.

Part of the proceeds from this evening will be going to feeding Youth Without Homes in Burbank when the Cobra 1st Legion head down in December with Brigade-One-Radio! So grab your sketching materials, get stoked, and get ready to draw the dastardly devils of COBRA!........ and maybe a few of those real American heroes from G.I. JOE! If you're unfamiliar with our models for this evening, the Cobra 1st Legion is a G.I. Joe themed costume/charity group founded in the bay in 2012. They conduct costumed photo-shoots at locations such as the USS Hornet Aircraft Carrier, Alcatraz prison and inside the USS Pampanito submarine. They have donated thousands of dollars worth of toys to the Children's Hospital of Oakland, conducted food drives for the Alameda County Community Food Bank and organize beach clean ups along the bay. Cobra 1st started in Berkeley and has grown to over 300 members in 11 countries. 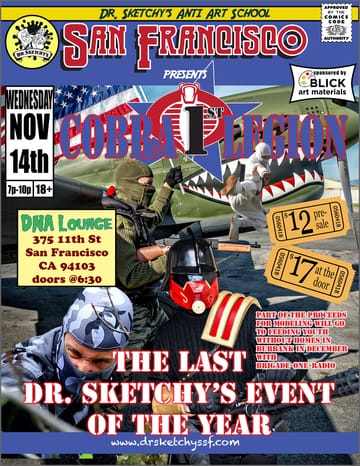