Axel Holmes
Khromata
Leonardo Barcellos
Mar Sadhu
Michael Liu
Murli
Psychic Monkey
Rodolfo Grellert
phan·tas·ma·go·ri·a (ˌfanˌtazməˈɡôrēə) noun. A sequence of real or imaginary images like those seen in a dream. Come join us for a night of flowing music in an out-of-this-world, immersive environment. Celebrate the coming of fall with beautiful people and sounds. Join the Phantasmagoria!

Juno Reactor is a pioneer of the electronic trance scene, constantly morphing re-evolving, exploring new areas visually and musically. From early days in London to Hollywood blockbusters of the Matrix, the story of Juno Reactor is constantly changing. He brings a unique stage presentation, dramatic, powerful, from the deserts of Burning Man to the Great Wall of China, from the act's origin in India in the early '90's to the powerful Mutant Theatre Las Vegas Show at Caesar's Palace this year - Juno Reactor has captured the hearts of the world. 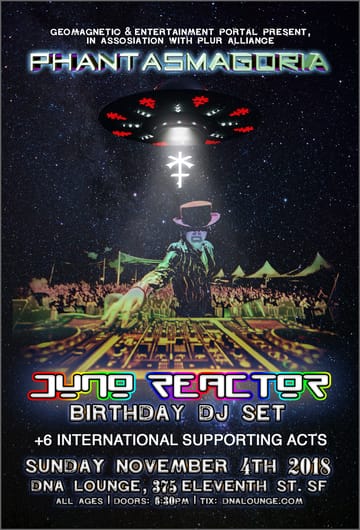