From the people who bring you the annual Pisces party, Pisces Music and Entertainment Portal have begun a new chapter in their growing series of zodiac events, a Libra Party. Join us on Friday, October 12th to celebrate the birthdays of your favorite Libra electronic music producers and DJs.

Strange Cookies are one PsyTribe Records' latest acts and took the festival circuit by storm this summer with their extraordinary psychedelic trance sound and solid music production. They recently co-wrote tracks with big names in the national psytrance scene including Triceradrops, Sentinel 7, and Ghost Note that even now remain hot on charts maintained by Beatport, Psyshop, and Juno.

Barakuda is renown in all the psytrance circles worldwide. He founded California's longest running psytrance event production company, Psytribe, and has even more experience as a DJ. His set at Psybloom earlier this year was a maximum stomper and the excitement level on his return is sure to make the ground shake once again.

Krikett, an East Coast native, is no stranger to what makes West Coast dancefloors move. Founder of Psynesthesia Music and Deco, Krikett has been involved in the production of many California psytrance events and festivals. She has seen our scene evolve and like her namesake, has adapted with the changing climate of psychedelic dance music. Expect her set to key in on the specific psychedelic frequencies that get you moving, dancing, and teleporting to another dimension.

And to bring balance to the entire party, we've hand selected the best Libra DJs to represent the sounds of psychedelic trance, house, and techno. In the main room, we will take a kaleidoscopic journey from psy-chill, to full-on psytrance, to forest psy. In the house and techno room, veteran DJs will show you why they are the most respected names in their genre. They represent the finest from all around the Bay Area, from as far north as Mendocino County to the South Bay's Silicon Valley, these DJs will make you groove and boogie to the funky sounds of house and the hypnotic ryhtyms of techno! 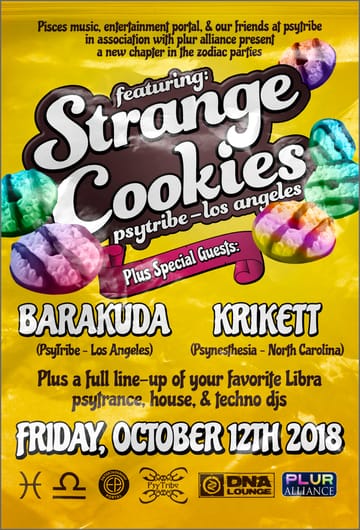