The triumphant return of:

Bootie Mashup's original DJ line-Up from our VERY FIRST party back in 2003:

Early Bird Drink Special: $7 cocktails until 10 PM! Free Bootie Mashup CD giveaways throughout the night!
Bootie hits a nightclub milestone -- 15 years of mashing it up in San Francisco! What began as a small monthly party for 100 people way back in 2003 is now a long-running San Francisco success story. Created by mashup lovers Adriana A and Mysterious D, Bootie Mashup became a genre-busting party like no other, winning numerous "Best Dance Party" awards, and becoming one of the driving forces of mashup culture, introducing club-goers to the clever sound of two or more songs fused together as one, long before anyone even knew what a "mashup" was.

For this special night, we take you back to where it all began, with Bootie's original DJ line-up from our very first party -- Adriana A, Mysterious D, and Dada, along with the triumphant return of legendary mashup DJ Party Ben, as they all spin the greatest mashups from the last decade-and-a-half. At 11 PM, it's Smash-Up Derby vs. Hubba Hubba Revue, as the Bay Area's best burlesque show gets backed by Bootie's very own live mashup rock band. The Monster Show brings drag queens for the Midnight Mashup Show, hip-hop fills the upstairs Lounge, and it's all still only $10 before 10 PM! 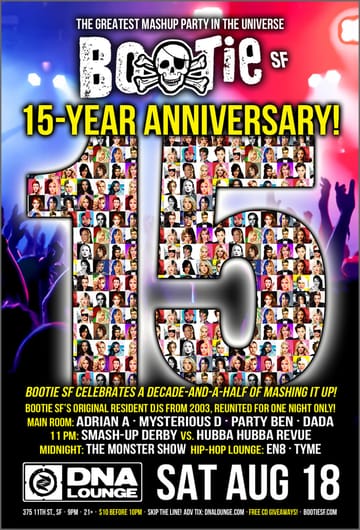