Trampa
Krimer
Xaebor
UK-born producer/DJ Rikki Moore, aka Trampa, has positioned himself as one of the leading dubstep producers of his generation with relentlessly heavy and gritty productions. He first garnered the attention after numerous releases through Never Say Die Record's Black Label and hasn't looked backed. The quickly rising producer topped the Beatport Dubstep charts in 2015 with his ground-breaking 'Consciousness' EP followed by "Black Hole," his collaboration with Never Say Die label boss SKisM, and his remix of Excision & The Frim's "X Up". The colossal success of these releases paved a path forward for his 2016 'Bulldozer' EP. With a bright future ahead and a growing loyal fan base, this Black Label standard bearer is marching towards global domination.

Hailing Montreal, Canada, Krimer AKA Simon Bertrand is a producer who quickly proved himself to be a force of nature. Krimer is known for pushing the boundaries of dubstep by taking multiple facets of other genres and boldly bringing them together into his own unique style. It is safe to say that Krimer's music has become a staple for many of the top preforming DJ's throughout the world. With a "No Days Off" attitude, Krimer has not only left a mark on the charts, but also a grand impression on thousands of fans with his contagious energy every time he takes the stage. 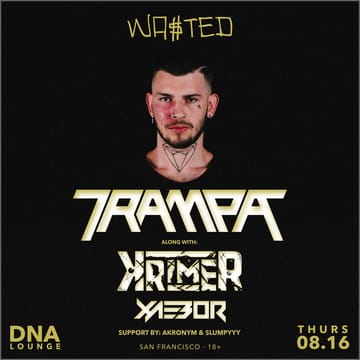