Early Bird Drink Special: $7 cocktails until 10 PM! Free Bootie Mashup CD giveaways throughout the night!
Outside Lands too crowded or too expensive? Or you're going but still need more? Then come on out to Bootside Lands! Bootie will be spinning Outside Lands artists throughout the night, but with one big twist -- they'll all be mashed up, of course! It might not be the real thing, but it's way cheaper and you won't get sunburned! Plus Smash-Up Derby on the Main Stage at 11 PM, Ya Mamma's Basement in the Hip-Hop Lounge, and $7 cocktails and $10 cover before 10pm. 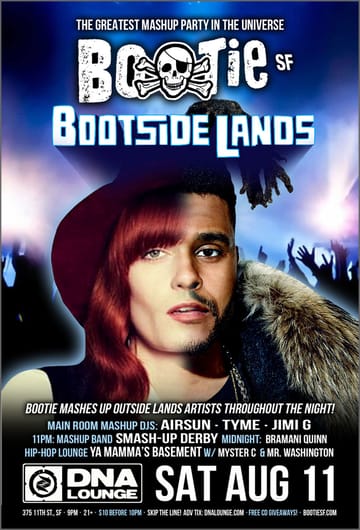