Early Bird Drink Special: $7 cocktails until 10 PM! Free Bootie Mashup CD giveaways throughout the night!
It's only been eight years since the "aughts" ended, but we're already nostalgic! So Bootie is paying tribute to the last decade in full mashup style with '00s Mashup Night! Bootie takes your favorite songs from the turn of the millennium -- from Britney to Eminem, Outkast to Amy Winehouse, Lady Gaga to Beyoncé, White Stripes to M.I.A. and beyond - and tosses them in the blender to create non-stop dance action! All this, plus a live aughts set from house band Smash-Up Derby, $7 cocktails and $10 cover before 10pm -- and more! 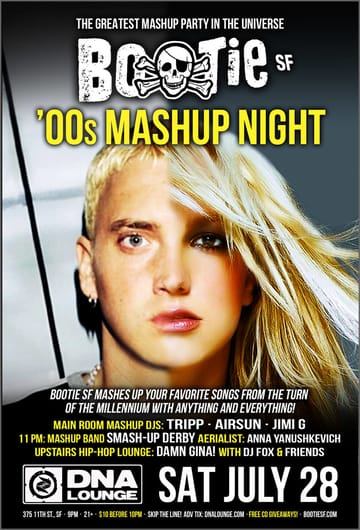