Crashfaster -vs- Striplicker -vs- Delorean Overdrive

Don't forget about Day 1!
For Freq-y Friday, we present an all-star lineup of classic chiptune artists from the East Coast's 8bitpeoples netlabel, all veterans of the long-running Blip Festival, reunited under DNA Lounge's roof!

Capping off the lineup is an extra-special three-way mashup set of Monobomb Records bands featuring a variety of performers presenting tracks from all three bands' catalogs: Crashfaster, Striplicker and Delorean Overdrive!

Based in New York City, Bit Shifter explores high-impact, low-res music produced using primitive synthesis as a deliberate aesthetic choice. Adopting a distillation of the less-is-more philosophy, Bit Shifter operates with a standard Nintendo Game Boy as a means of exploring the aesthetics of economy, pushing minimal hardware to its maximum.

Nullsleep is the alias of Jeremiah Johnson, an electronic musician whose style is best described as post-cyberpunk: a combination of distorted synthpop, electro, and industrial produced with repurposed low-bit electronics. His approach embraces the politics of appropriation, leveraged limitations, destructive process and data artifacts. The resulting sound is a wall of digital noise, driven by a deep pulsing beat, that is inevitably torn apart in a cascade of glitches and drones emanating from cheap plastic devices. In 1999 Nullsleep cofounded 8bitpeoples, a collective of artists interested in the audio-visual aesthetics of early home computers and video game consoles. He has since released a number of recordings through 8bitpeoples, Astralwerks, Aniplex and others. Based in New York City, Nullsleep has performed over 150 shows throughout North America, Europe and Asia, including successful world tours in 2006 and 2009.

Combining his love for type, patterns and limited palettes, Minusbaby has developed his own unique visual and musical languages where rather than easing into common trends, he utilizes multiple sources outside of video game culture to broaden both his and the movement's repertoire so as to expand the canon and avoid Super Mario cannons.

Trash80 is the musical project of Los Angeles based digital artist Timothy Lamb. This obsolete technologist utilizes custom built software and hardware inspired by machines of the past in the creation of the heavily melodic but eminently danceable Trash80 sound. A strong believer in open source movement, you can find his body of work published under Creative Commons license and freely available online.

Glomag has been writing and performing music on Game Boys since 2001, working with the programs Little Sound DJ &Nanoloop. He once pulled a small pile of aluminum cones from a garbage dumpster and attempted to sell them to the Museum of Modern Art. He has performed solo and in the duet, foci + loci, with Tamara Yadao (Corset Lore) in France, Spain, Australia, Belgium, The Netherlands, Hungary, Austria, as well as numerous cities in the US. His newest release is a collection of his horror film scores from the 1980s entitled "Confessions Of An 80s Low Budget Horror Film Composer."

Crashfaster combines elements of 8-bit video game music, synth pop and industrial. Their songs, while bright and effervescent, are often darker and more melancholy than the work of most artists associated with the chiptune scene, reflecting themes of loneliness and disenchantment.

Striplicker is a visceral collision of beat-oriented lo-fi electronics and the raw fury of industrial-metal inspired guitar and drums, creating a sound filled with unforgiving brutality and carnivorous groove-inducing earworms.

Mr. Smith: "Tell people that I will begrudgingly play lots of Synthwave. People love Synthwave. If you have awkward friends from out of town, you can take them to a Synthwave club and everyone will be happy. I will also play some electro remixes of video game music. It's basically an excuse for me to play video game music, but playing remixes makes it look like I'm being less lazy. I'll probably throw some 8-bit tracks in there, too, but I'll go for the bass-heavy ones instead of the shrill ones that will deafen the bartenders. I think they're still upset with me playing the 8-Bit "Turn Down for What" cover. I'd add a list of places I've DJ'd at, but I don't think anyone there will care about Das Bunker or some Canadian Industrial festivals, so you can just say I'm one of the guys from Turbo Drive and 8bitSF." 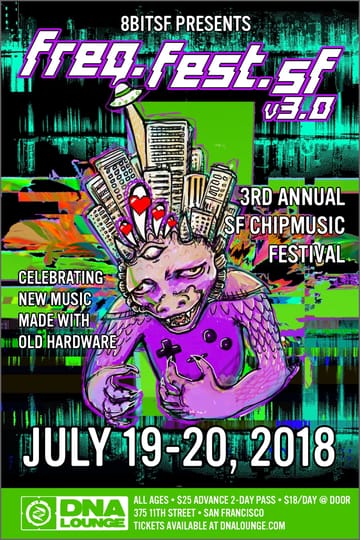