Texas Hippie Coalition
Kobra and the Lotus
Brand of Julez
Granny 4 Barrel
For a band called the Texas Hippie Coalition aka THC, the sound coming from this four piece isn't exactly flower power and peace and love. Instead, these guys treat your ears to a full-force, hard rockin' mix of heavy metal and classic rock that they call "red dirt metal", complete with leather vests, long hair and beards, and tattoos. They're your favorite rebel outlaws, basically, and they are here to keep southern rock alive. They kind of sound like what Lynyrd Skynyrd would be if they had a couple of Danzigs thrown into the mix -- and they are definitely doing their best to infuse southern rock with metal.

The band has existed to bring the roaring crowd that hard rock mix for more than a decade, and have released album after album filled with deep fried heavy metal -- and each album has been more popular than the last. 2014's "Ride On" made it to number 5 on the US Hard Rock chart. Not bad for some good ol' rock and rollers from Denison, Texas -- a town of 22,000 best known for the longest high school football rivalry in Texas. Smokin' weed, rockin' out, and ridin' on are elements than run through the band's career) -- and don't be surprised if you find yourself doing exactly that at the live show (their fan club is called the "party posse" after all). Get ready to head bang as you take in a little THC. 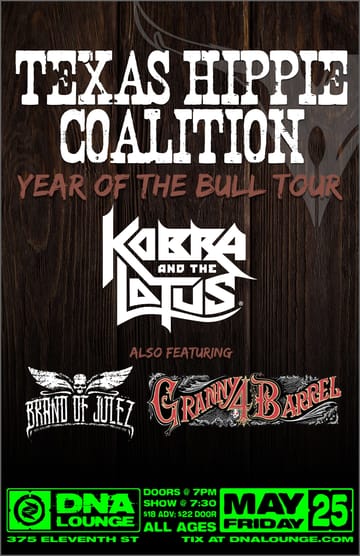