Royal Thunder
Pinkish Black
Viqueen
When Mlny Parsonz rips into a phrase, you feel the wound. Over three albums, Royal Thunder's soulful hard-rock has very much been tied to a desperation to crawl out of darkness and find some kind of hope beyond. Over three albums, that drive has kept the Atlanta band hungry and humble. Royal Thunder's dark, 70s-style boogie drives through winding melodies yet fully locked into its own groove. Josh Weaver and Will Fiore find even more intricate ways to weave their guitars without detracting from the band's purpose, and drummer, Evan Diprima always gets the tasty drum fills throughout all their structures.

One of the most interesting, forward and far-thinking experimental duos currently active, Pinkish Black is a group that displays an unflinching capacity to dip their toes into all sorts of disparate musical markets, from doom metal and industrial to post-punk and no-wave. They are an exploratory and vaguely metallic out interested equally in doomish synths as well as goth, industrial and krautrock. Formed after the suicide of the bassist from their previous group, this Texas duo has emerged with something that sounds equally grim and triumphant and despite the despair and misanthropy imbedded into their craft all of the songs ultimately sound like a conquest that has won over not just the critics but legions of fans.

Pronounced Vy-kween, like Viking. Viqueen is an all-female powerhouse with a heavy sound, unforgettable melodies and widespread roots. They'll make you want to party, no matter who you are. 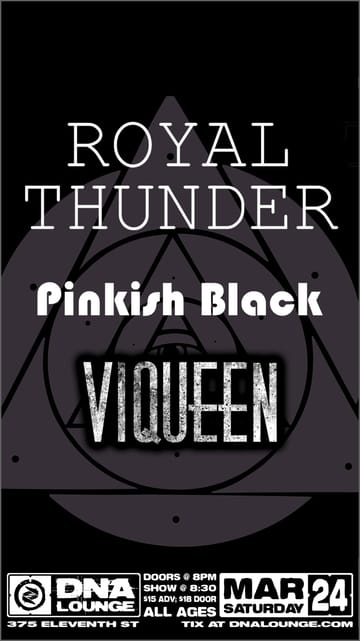