Forest Green
Cosmic Selector
Carlos Alfonzo
Reverend
Scott Rich
Kikipopo
TreeKat
This St Patrick's Day edition of Pisces featuring the return of Pisces 2009 & 2014 special guest, Deedrah! Deedrah is widely considered as one of the pioneers of psychedelic trance having released countless albums and singles for over 20 years and co-founded the legendary psytrance act Transwave and the massively popular supergroup Krome Angels. Currently on tour to support his new album, Songs in the Key of A.I. (Iboga Records), Deedrah will bring his sexy melodic beats to the Golden City of San Francisco! His new productions are sure to hypnotize new crowds and longtime fans. The music thirsty dancefloor at the DNA Lounge will be completely tranced out! Pisces 2018 will also host Pisces debut of Synthetic (JOOF Recordings) and bring back Parus of the Red Marines and Hanz Dwight from Pulsar Music in Los Angeles. Get ready for another mystical journey into the inner self... 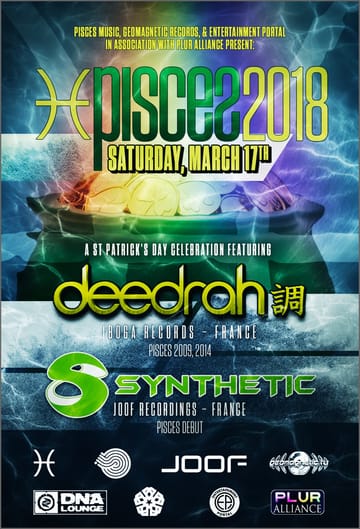