Lunice
DJ Dials
Control is an 18+ event focusing on the more bass-heavy acts in dance music. This night brings both established, internationally touring acts such as Nghtmre, Trippy Turtle and Nero, while also serving as a launching point for many up-and-coming acts you may not have heard of yet (but definitely should).

Lunice Fermin Pierre II, or simply Lunice, found the inspiration to start producing music through his longtime love of hip-hop and the culture that surrounds it. His competitive career as a b-boy in his younger days led him to start making songs he could dance to. Born and raised in Montreal, Lunice is a true solo artist: He's driven by singular, perhaps stubborn, vision that results in remarkably unique trap and hip-hop. That isn't to say Lunice doesn't work well with others, as his short-lived collaboration with fellow producer Hudson Mohawke as TNGHT remains a highlight for both producers' careers. TNGHT's acclaimed 2012 self-titled EP, which currently remains its only official release, made shockwaves. It caught the ear of Kanye West, who enlisted the duo to collaborate with him on his 2013 opus, Yeezus.

Despite that success, TNGHT abruptly entered a hiatus in late 2013, and as Lunice told The FADER in an interview last September, "We knew that there was going to be some kind of electronic trap wave coming, we didn't necessarily want to be a part of it." After four years of letting that EDM-bro-trap tsunami recede, Lunice finally returned last fall with CCCLX, his debut solo album. CCCLX is stylistically a natural continuation of his earlier solo EPs, but the tracks are grimmer and stranger than ever before. "Mazerati" sounds like it could be on the soundtrack for a hypothetical hip-hop Tim Burton movie, and the Denzel Curry-featured "Distrust" may be the angriest thing Lunice has ever created. Although he has been producing for more than a decade, Lunice's creative energy is higher than at any other point in his career. -- SF Weekly 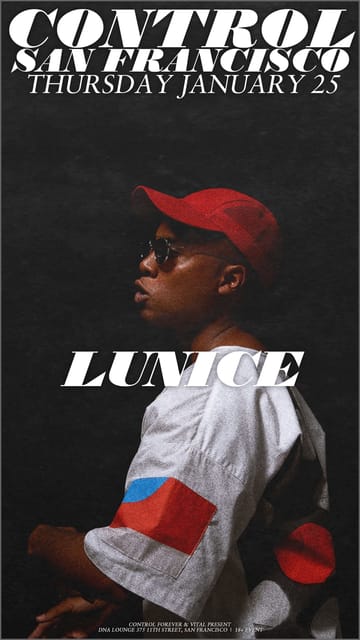