Early Bird Drink Special: $7 cocktails until 10 PM! Free "Best of Bootie 2017" CD giveaways throughout the night!
Everybody loves celebrating their birthday at Bootie -- even if it's a little late -- and Bootie DJ and co-creator Adriana A is no exception! For their special night, Adrian picked out all the DJs and performances, including picking out all the songs in Smash-Up Derby's set at 11 PM! Come out and celebrate! $7 cocktails and $10 cover before 10pm!

Launched in 2003 by San Francisco DJs Adriana A and Mysterious D, Bootie is the first and biggest mashup dance party in the world, mashing up pop songs both past and present. With its clever mashup formula, Bootie has been an unstoppable juggernaut for the past 14 years, winning numerous nightlife awards in multiple cities. Keeping one's brain guessing and body dancing with creative song combinations, it's the soundtrack for the A.D.D. generation. 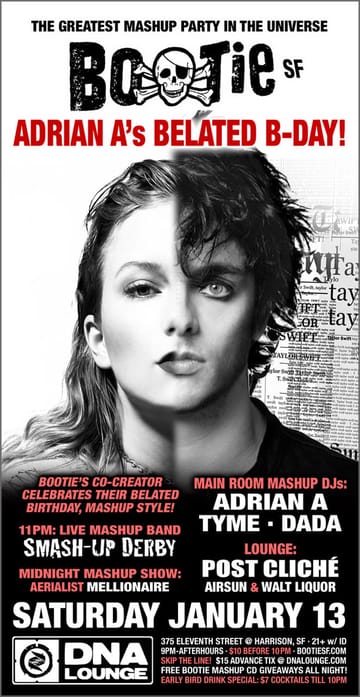