Vinyl Williams
Weeed
Max Gardener
Vinyl Williams do not like to describe or compare themselves to anything. They prefer to let the music and visuals take you on a trip and pull you into the aural cathedrals of Celestial Pop. They are an experience live that combines psychedelic visuals and projections that transport you into a place both tranquil and energized. Beautiful vocals and shimmering and cascading guitar melodies from the astral plane that create a perfect psychedelic experience without drugs.

Weeed is having quite the transformative year-and no, I'm not talking about the recently legalized medicinal herb. I'm following the smoke trails of Bainbridge Island's homegrown rock band, as they blaze through Seattle's music scene after nearly a decade of grounding their sound in various garages and barns and dimly lit venues along the west coast. The band's origin story is like many others: two middle school neighbors develop a deep friendship over their passion for exploring the depths of music. But, unlike most middle school bands that sprout and whither, their story doesn't end there. Beneath the tall trees and low-lying clouds of Bainbridge Island, a patchwork band of young rockers formed and with it grew the island's signature music scene, with deep roots that have spread as far north as Bellingham and on south to Portland and San Francisco.

Max Gardener drifts forth, mixing the sunny trademarks of sixties psych and nostalgia-inducing guitar pop hooks with his omnipresent optimism and a healthy dose of melancholy. Resulting in a series of kaleidoscopic songs about times past and the days ahead. Memory Lounge contains sparkling multitudes: songs for the beachside happy endings of a teen movie, long nights spent dreaming alone, or endless summer evenings with friends 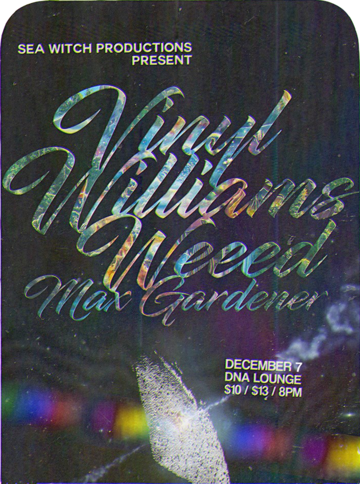