Starrfish (Boy Division)
It appears Macaulay Culkin's "Pizza Underground" has finally and rightfully been supplanted as the number one parody/tribute band whose songs are all based around one arbitrary noun. Enter Koi Division, a Joy Division parody/tirbute band that writes songs about, you guessed it, fish. According to them, the fish-mask-wearing quartet is the "only Fish Goth Joy Division parody/cover band that matters", a title that's not likely to be challenged anytime soon. Every aspect of the band has been thoroughly attuned to the fish theme, with members donning the aquatic monikers Ian Clownfish, Hook, Bernard Salmon, and Steve Moray. Classic Joy Division tracks "Disorder", "Love Will Tear Us Apart", and "Transmission" are rewritten to become "Fishorder", "Lure Will Catch Us a Carp", and "Trout Fishin.'" The new, pun-filled lyrics may not carry the same emotional weight as Ian Curtis' original verse, but there's something really special about seeing a man put his whole heart into singing about the short, brutal life of a fish.

Chaki is a Japanese term that literally means "tea implement" or a "caddie" for making tea. However, this particular Chaki is a San Franciscan, multi-instrumetalist who describes his unique blend of Bootsy Collins meets Bauhaus as "lo-fi, gothic, bedroom funk".
Photo Gallery: 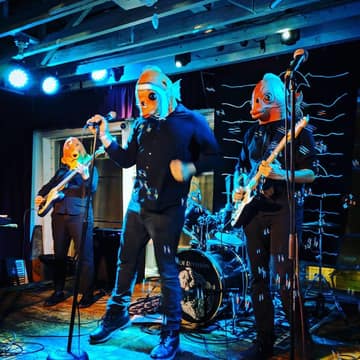 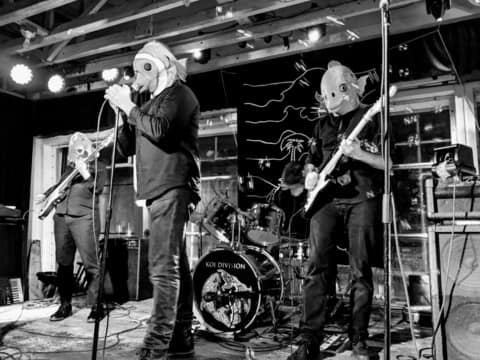 Koi Division: Whale in the Sand