Maybe somebody in a megazord costume. Or corn. We've got a corn suit too now.

The Hoodslam Band
The accidental phenomenon returns to the city and DNA Lounge for some Sunday Funday Day Drinking! There is literally no better way to kick off your october than with this extra special festival for the senses. We've checked. This is it.

Featuring a series of matches ranging from the athletically daring to the sexually bizarre, you're gonna see some dazzling displays.

Hoodslam mixes cartoonish violence, ridiculous storylines and pure athleticism with copious amounts of obscenity to create one of the most unique nightlife experiences you are ever likely to see! Hoodslam does not just exceed expectations of what wrestling can be, it exceeds expectations of what an entertaining night out should be. Using nostalgia and bizarro costumes to play outside the traditional dichotomy, it doesn't just stick to the illusion of pro-wrestling, it plays with it in a way that takes it to unforeseen levels. Rather than trying to convince the audience that anything is real, they go so ridiculously over the top with this complicated charade that the audience can't help but go along and be both enthralled and bewildered with the incredible feats of athleticism and oddball theatricality taking place before their eyes. 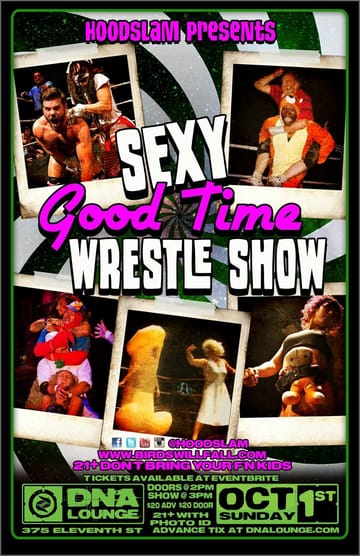