Decapitated
Thy Art is Murder
Fallujah
Ghost Bath
Formed in a storm of melancholy, fire and rage by two teenage brothers (ages 12 and 16) in 1996, Decapitated have honed their reputation as international leaders and absolute colossal purveyors of the metal genre. In 20 years, they have released five albums that are considered to be some of the most influential classics of modern Death Metal in the 21st century. The band has managed to cross-breed various styles and sounds, setting the bar higher with each new release. Flirting with various tempos, mixing Death Metal with Grindcore, Black Metal atmospherics with Stoner-Rock vibes and laying down foundations upon foundations of grooves and heavy, rhythmic riffs that transcend descriptions.

Rising from the unhallowed wastes of Western Sydney, extreme metal outfit Thy Art Is Murder have carved a trail of bloody mayhem since their inception in 2006. The band have traversed the highways and autobahns of Australia, the UK and Europe on a relentless crusade to destroy every venue and audience they can. The pointed result is to bring to life a live representation of Thy Art Is Murder's growing dissatisfaction with all aspects of modern life - political, religious, social and environmental - to as many people as possible. Fusing blast-beat technicality with thunderous breakdowns, an intensity born of their nascent hometown scene with the blackened grandeur of luminaries like Behemoth and the pit churning groove of Tampa originators like Morbid Angel, the furiousness of the musical arrangements provide a bloody canvas for vocalist CJ McMahon's outpourings of bile. No strangers to stoking the fires of controversy and never shying away from criticism, the band have not toned down their art for the sake of palatability and have introduced a morose melodicism into their maelstrom - like a rumination before pulling a trigger. With their best work to date ready to be unleashed on an unsuspecting world, Thy Art Is Murder will once again take to the road to unleash their hate with one simple message - get in the pit or get out of the way. 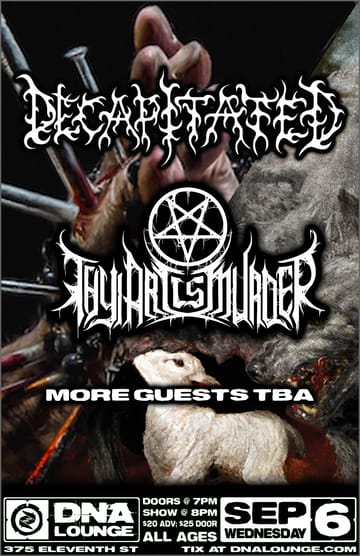