"The Impeachment": Not My President's Day Weekend

Two party pass includes admission to Raunch at Codeword on Monday morning!
DJ Cindel grew up around Chicago where his endless exposure to house music led to his love, and eventual practice, of producing it. Having done so since the age of 15, he has especially honed his skills creating drum mixes and tribal-house vocals, earning him the title "The King of Drums". Major influences such as Danny Tenaglia, Chus and Ceballos and Ralphi Rosario, along with his Puerto Rican roots, have helped mold his high-energy style into a successful career.

His big break came from a gig at Chicago's Skybar, which led to a residency at Spin in Boystown where he held his own night called Sound Factory in the year 2006. Cindel later earned a residency at Club Ibiza in North Carolina opening for Hector Fonseca, as well as Palace on Ocean Drive in South Beach. He spent some time living in Miami playing other clubs such as Twist, Mekka, Euphoria, Therapy, white party, winter party and getting an official yearly residency at Score nightclub.

Cindel made great strides by being named the WINNER of Matinee Las Vegas 2013 and debuting at Circuit Barcelona Festival where he headlined the Beyond party in 2013. Other noted credits include working alongside two-time Grammy nominee Tony Moran as a part of Chicago's Freedom Revolution at The Castle. He is the first DJ to play 2 consecutive years at Puerto Rico's Choreographers Ball, and was a headliner at Fly in Toronto for their Memorial Day Weekend Military Ball.

After a great year working hard on his craft and making a name for himself, Cindel was nominated and voted Best Circuit DJ at the Odyssey NYC nightlife awards, booked world Pride Toronto for two consecutive years playing the amazing TreeHouse party alongside world renowned DJ's Isaac Escalante & Alain Jackinsky and also headlined the official rooftop party at NYC pride. Cindel also made his big debut at one of the most popular and famous circuit events of todays scene, XLSIOR Mykonos Greece.

Now back in Chicago, DJ Cindel continues to land bookings all over the US as well as internationally, holding 7 residencies in LA, Chicago, SF, Atlanta, Boston, Vancouver & Toronto. Cindel is very known for his deep tribal after hours sounds mixed with lots of drums. No matter what the event or venue, he commits to giving you a set full of fantastic beats and quality sound.

Keep an eye out for this amazing talent at a venue near you! You may also check him out on Beatport, Soundcloud, Podomatic, hearthis, iTunes and Facebook! 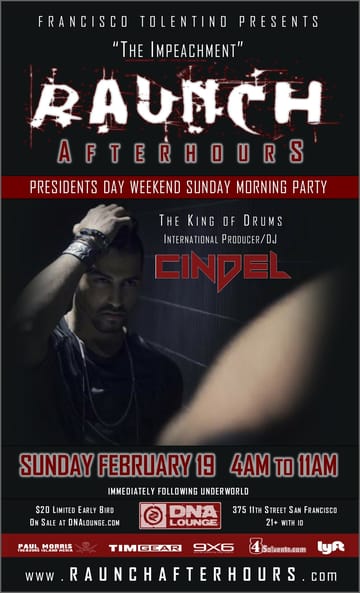 Raunch After Hours: The Impeachment
Past related events: