Fea
Kristeen Young
M. Nero Nava
Fea continues the ferocity of Girl In A Coma with Phanie Diaz and Jenn Alva, joined by lead vocalist Letty Martinez and guitarist Aaron Magana. Their melodic brand of riot grrrl chicana punk immediately caught the ear of Joan Jett who signed them to Blackheart Records. Producers on their self-titled debut include Lori Barbero from Babes In Toyland, Laura Jane Grace from Against Me!, and Alice Bag, all of whom perfectly compliment the band's fierce exploration of societal, cultural and gender-related issues. Mixing humor with abandon in English and Spanish, Fea empowers listeners and inspires dissidence. Those whose aim to oppress are in FEA's crosshairs, and resistance has never sounded so infectious!

If Tori Amos had been raised as a feral child, she might have sounded a bit like Kristeen Young. Like Amos, Young has a broad vocal range and embraces the piano as her musical instrument, but there's a wildly aggressive emotional energy in her songs, as well as an intelligently transgressive mindset that marks her as a true original. She has released seven studio albums and has collaborated with Brian Molko of Placebo, Morrissey, David Bowie and Dave Grohl and producer Tony Visconti. 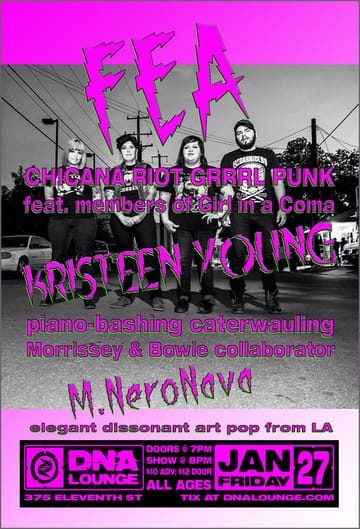