Hed PE
Short Fuse
Upon its inception in 1994, the sole purpose of Hed PE was to fuse the Southern California region's long-standing punk rock heritage with G-funk-inflected hip-hop.

Hed p.e. has never taken a break from releasing albums and touring, which has enabled them to survive and meet with very strong independent success over the years and they have stayed true to the (Hed)p.e. standard of change and growth both personally and musically. The new album "Evolution" takes the band back to their metal and underground roots they grew up with as well as some Led Zeppelin infused tracks and a couple of reggae inspired closers.

According to vocalist Jahred, "The name (Hed) p.e. means our consciousness is connected to the planet and the planet is evolving, therefore, we as her children, evolve with her. The "p.e." originally was defined as Planetary Evolution, and sometimes morphs to Planet Earth and back, but both carry the same message, the (Hed) is the symbol for consciousness. We Are On The Mothership!" 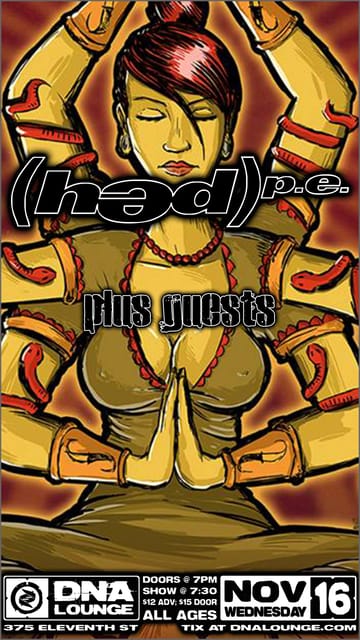