A benefit for the OHA program in honor of HIUSA's Sleep For Peace event.
San Francisco's Anthony Jones is best known for being the voice of the band, Monastic. Anthony's solo albums feature old world instrumentation fused with darkwave synths and beats. All of his album sales and live performances have been used to raise funds and awareness for the Wolf Mountain Sanctuary in Lucerne, CA. Having been a composer and vocalist for "Alaska Highway" with Mike Best of "Among the Weeds" and "The Point of Reflection" with John Koviak of "Sub-Version", Anthony has gained a substantial North American fan-base but it was his cover of Suicide Commando's "Love Breeds Suicide," and his rendition of L'ame Immortelle's "Love is Lost," as well as his vocal contributions to :Wumpscut:'s "Killuh," that exposed Anthony to world-wide audiences and brought him critical acclaim that has allowed him to tour and wow the world.

Monica Richards is best known for her musical work as half of the critically acclaimed duo, Faith and The Muse. She is a long-time musician and songwriter who also happens to be a visual artist, graphic designer and writer. Over twenty five years as a front woman in underground music, has heralded her a far reaching reputation and highest regards thanks to her powerful voice and theatrical stage presence. She is a riot grrrl and a fairytale queen all rolled up into one unbelievably talented artist. She belongs in the forefront of yesterday, today and tomorrow's music, forever changing, evolving and being true to herself. 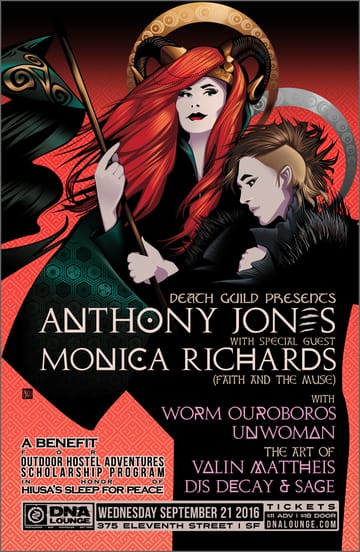