The Aggrolites
Phenomenauts
The Rudicals
The Aggrolites are more than a band they are a movement unto themselves. They carry a banner - one created with their own hands. This banner reads, "Dirty Reggae," and represents their signature fusion of reggae, soul, grit and determination. For many magnificent years, this dirty reggae bunch has rolled from city to city, across the pond and up main street USA. They rally the kids, the parents, the students, the cops, the bosses and the drifters. The people come, they relish in The Aggrolites, the dirty reggae and the joy that comes with it all. The liberating rhythms and catchy grooves demand a return trip.

Out of the Los Angeles school of hard knocks, The Aggrolites have earned a PhD in "feel good music." On the road they educate with the thunder and punch of the reggae drums and bass, the ripping, soulful melodies of the organ and guitars, and Jesse Wagner's voice - a gift from the heavens, a perfectly intact gift from Otis, Sam, Ray and Wilson.

The Aggrolites have a specific way of making music. They don't over think it, they don't obsess over pop culture demands, they walk onto a stage or into a recording studio and let "it" happen - a culmination of inspiration - from the road, from playing alongside legends, and from the energy and motivation of their die hard fans.

Their songs are featured on the 2008 Vans Warped Tour Compilation and numerous Give 'Em The Boot compilations from Hellcat. In 2007, the band also collaborated with Rancid front-man Tim Armstrong on his solo A Poet's Life (Hellcat 2007) CD/DVD release. 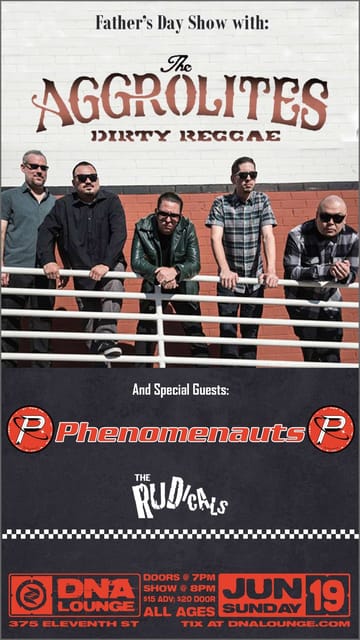