Come as you are or dress up in creative Prom attire to win Prom King, Prom Queen, or Best Couple. Contest at midnight! $100 cash prizes!

Free entry all night for drag queens and Full costume and make-up! Free Bootie mashup CDs to the first 100 people!
Bootie celebrates Prom season with "a Prom for the rest of us!" Dress up in creative Prom attire for a chance to win $100 cash prizes, with you, the Class of 2016, deciding the winners! Your chaperones for the evening will be resident DJs Adriana A and Airsun, as they play all your old and new favorite mashups, while at 11 PM, the Monster Drag Show gives a non-stop Prom-themed drag show. Upstairs in the Lounge, it's the Monster Electro-House Party, while in Above, Glitterazzi welcomes you to the "Darkside of EDM". In the Dazzle Room, Ya Mamma's Basement brings that hip-hop and R&B you can't get enough of. All this, plus drag hosts Suppositori Spelling and Holy McGrail, club photographer ShutterSlut capturing you in all your Prom finery, and FREE Bootie mashup CDs to the first 100 people!

Launched in 2003 by San Francisco DJ duo A Plus D, Bootie was the first club night dedicated solely to the then-new bootleg mashup -- and is now the biggest mashup event in the world, with regular parties in several cities across the globe. Winning various nightlife awards for the past 12 years, Bootie celebrates pop culture both past and present, keeping your brain guessing and body dancing with creative song combinations that provide the soundtrack for the A.D.D. generation. 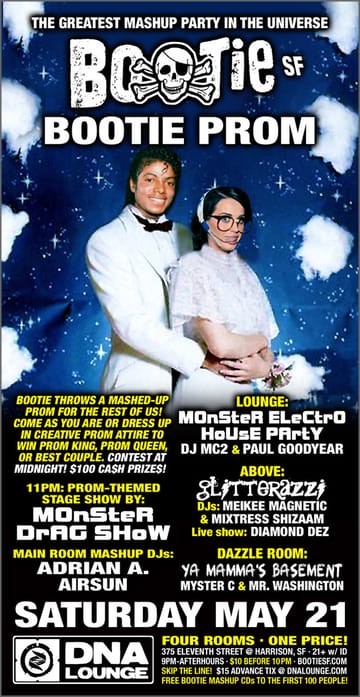