Gleb Samoyloff (Agata Kristi)
Naïve
Punk has the power to cross time, oceans, and even make it out of claws of Russia virtually unscathed. Formed in 1988 in Moscow, Naïve did something that is hard to believe -- they were unabashedly punk in Russia. Did it matter that they were ten years after the first wave of punk in the more western parts of Europe? Not really. They flew in the face of everything that was right and good in Russia. Proudly anti-communist (and anti everything else, like good punks are), they even set up in front of the Russian parliament to play a show and proclaim that "Boris Yeltsin is an asshole." Naïve has the distinction of being the first Russian punk to have music released to a US audience, fittingly enough by the still thriving zine Maximum Rock and Roll. The powers that be knew all about Naïve; the band weren't allowed to leave the country to tour for several years, until the political climate had swung a little more towards liberalism (thanks Coup!). The band partied hard, drank a lot (which is the case with many a punk and many a Russian), lost members, moved to US for a time, and still put out fast, furious rock that embraced self-destruction, rallied against being a cog in the machine, and somehow got popular enough to be on Russian radio. After nine albums, it's clear that these guys have the punk ethos and sound down - of course that should not surprise anyone after almost 30 years of sticking to their guns. Fast, loud, ferocious punk. Think NOFX or early Green Day but soaked in vodka and the reality of growing up in the Soviet Union.

I don't think a US rock and roll band would think to name themselves after the author of "Miss Marple Meets Murder." But, you got to hand it to these Russians, they make it work. A mix of punk, new wave, and rock sounds, Agata Kristi has cornered the market on gloomy Russian synth sounds. The band started as the Soviet Union was transitioning into the Russia we know and love today. This also happened to be the time that new wave was super popular: the late 80s. Agata Kristi is the Russian answer to The Cure. The music is emotional, arty, and heart felt, yet a little dreary, just like all the best new wave and post punk bands were. One of their most well known hits, "Opium," sounds straight of new wave 80s, but didn't hit the airwaves until the mid-90s. The band almost sounds more like German contemporaries than Russian rockers. And, still, Agata Kristi has remained a strong band after decades of recording and touring, the loss of a founding member, a short hiatus, and some international acclaim. These guys have sold millions of records in Russia, and for Russian ex-pats living in the Bay Area, it'll be a nostalgic treat to see Agata Kristi after all these years. 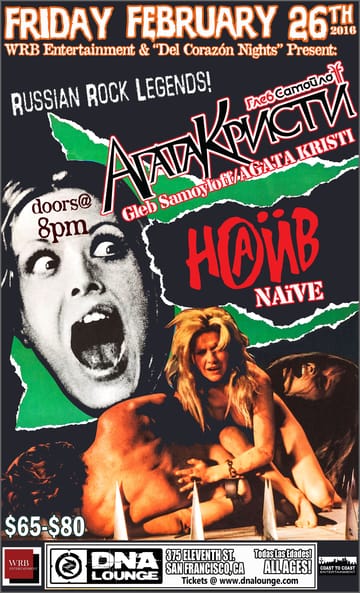