Authority Zero
Eken is Dead
United Defiance
The Atomic Machines
Mesa, AZ based punk rock royalty Authority Zero has managed to weather the music industry storm and endure living on the road away from friends and loved ones for almost 2 decades. With four studio albums under their belt, two live acoustic albums, and two EP's, they appear to be just getting started. Initially their goal was simple; create a sound that paid tribute to their punk rock forefathers, but not confined by the musical barriers that typically bound the genre together. The band's style is rooted in reggae and skate punk, with Bad Religion, Pennywise and Sublime cited as heavy influences.

With their fifth studio album The Tipping Point, Authority Zero is determined to carry on with perseverance and dedication to spread their music and message to fans around the globe. 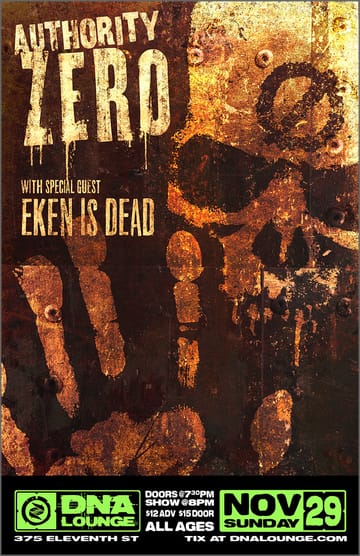 Authority Zero: No Other Place
Past related events: