Abigail Williams
Today Is The Day
Your Enemy
War Cloud
The Olympia, Washington symphonic black metal band Abigail Williams borrows its name from an infamous accuser who was partially responsible for the Salem Witch Trials. Ironically, the groups early history was checkered with similar (if far less deadly) acts of treason as more than a dozen musicians sifted through their ranks leaving vocalist, Sorceron as the only mainstay.In a glutted world of black metal, Abigail Williams may be the band to spark some vibrancy back into the wavering scene tapping into the original spirit of black metal's style but injecting it with intricate touches of classic and thrash metal and a raw yet clear production and a venomous zeal, that is as infectious as it is lethal. The vocals are harsh and shrill, the guitars buzz, rip and roar alongside articulate, rapid licks and blazing solos while the drums slam and crash like exploding mortar shells with just enough synth washes to crate a terrifying and thrilling musical experience.

Today Is The Day: There is Prog- a developed subgenre with its own set of conventions and cliches- and then there is truly Progressive. Few bands deserve that tag more than Nashville Tennessee's Today Is The Day, whose relatively unassuming name deceptively masks the psychotic musical violence found within their music. Music that rattles conventional wisdom and complacent assumptions found within the heavy music scene and shakes it to its foundation. Heavy doses of metal, grindcore, punk, psychedelia and progressive rock colliding viciously but never disjointed or slapped together, with nary a whiff of pretension or obligation in the myriad twists of their songwrting. It fits uniformly and naturally because of it's simplicity. While the breadth of Today Is The Day genre-bending vision may label them Maximalists, they are Minimalists in their execution. 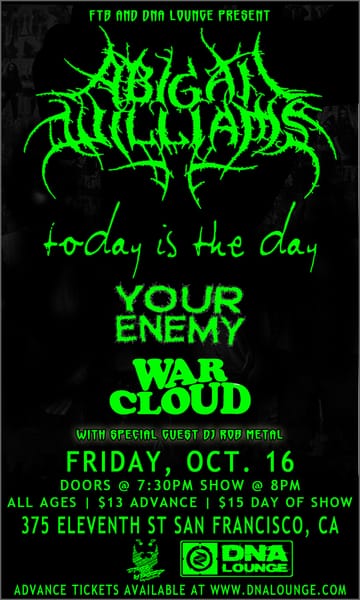