Nina Diaz
Maria Del Pilar
Survival Guide
Lungs and Limbs
Nina Diaz: After spending her teens and early twenties in San Antonio rock and roll sweethearts Girl In A Coma, Nina Diaz decided to take some 'me' time. And fans of her songwriting and unique voice can rejoice: she's good. Not just side project of your favorite band good, but she's easily able to stand alone as a solo artist. Girl In A Coma was founded by Nina and her sister in 2006, and Nina decided to pursue the band rather than high school. It didn't take long for the talented group to get noticed by the living legend herself, Joan Jett -- and before you know it young Nina was signed to Joan Jett's Blackheart record label. Nina has seen a lot of the world through Girl In A Coma, perfecting her live energy by opening for huge acts like Frank Black and Morrissey. But after nearly a decade as the frontwoman for a band, it must be liberating to cut your own path -- or at least be able to order a band around without having to worry about pissing off your sister. Her solo act is mature, after years of being in the music biz, it's hard to believe she's only 27. This young lady has now been sober for more than two years, and the material she has created is a reflection of that fact. Nina's dark, lush voice is captivating, soaring and sinking with ease all while she plays guitar and commands the stage. Prepare yourself for a mix of puro rock and latin rhythms, and be ready to dance.

Maria Del Pilar: Part pop diva, part mystic dreamer, and all Los Angeles style, Maria Del Pilar paints a complex sonic for wonderland dancers and thinkers alike in both English and Spanish. After years in now-legendary LA punk rock foursome, Los Abandoned, Pilar decided to carve out her own path, capitalizing on ravenous fans, her multi-instrumental skills, and her classical training to create well-crafted tunes and energetic (and sparkly) performances. The lady vibrates on a whole 'nother level -- and you won't be able to stop yourself from slipping into a steady groove (or an all-out dance battle, if you're lucky). Pilar's compositions stem from years of weaving together pop sweetness with indie sensibilities and a slightly punk attitude. "Ilegal en Estyle" was touted as one of the top ten songs about immigration by the Village Voice, "Things Are Falling Apart" is a confessional and compelling tune, and "Quien Eres" treads some philosophical ground hidden under a can't-stop, wont-stop beat. Blondie comes to mind, but with a Chilena twist. You can hear the love of all genres throughout Maria Del Pilar's body of work: 80s jams, punk, indie, and more when Pilar takes the stage. Pilar sings, plays her uke, and gets people en el dance floor while drummer Matt Mayhall holds down the rhythm and Chilean strummer Giacomo Picasso takes electric guitar duties. Lots of people will tell you that Maria Del Pilar, with her use of Spanglish and meaningful, poetic lyrical abilities, showcases something vital and important about Los Angeles (and the US in general) -- but even with the weight of all that, something more primal emerges: a beat and a voice that you can't ignore. 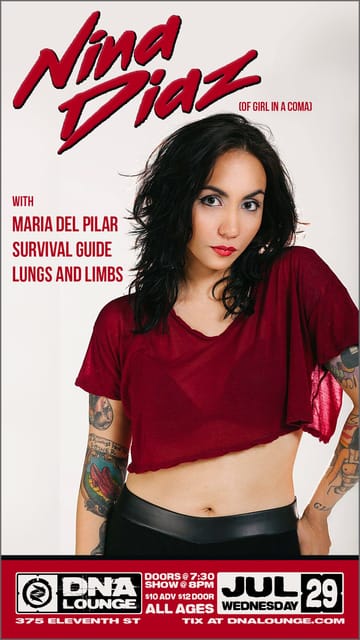