Alien Ant Farm
Kaleido
Striplicker
It's hard to not be stoked about Alien Ant Farm. Straight from the nostalgia zone, the band has never stopped existing, though they were on hiatus and had the requisite band drama that comes from success. Despite losing one original member (which isn't bad for a band who made a lot of money from a hit song), the band has continued touring the UK and US, and steadily working original material. Sure, it's been a decade since their last album, but the band hasn't lost an ounce of that energy that made them so perfect. And if you've been waiting all this time for a new AAF album, you won't be disappointed. Singer Dryden Mitchell may be known for covering Michael Jackson's "Smooth Criminal" more than ten years ago, but he's also pretty amazing at being a combative, energetic frontman who does and says exactly what he feels. Not bad for a man who nearly died in an accident, one that likely put Aaf on the backburner for a number of years. You should feel lucky to have him back, world!

The new Alien Ant Farm record is like being welcomed into the embrace of an old friend: rock, humor, and catchy refrains are still Aaf's go to crowd pleasers, but they have thrown in some experimental stuff too. You won't be disappointed, whether you're a new fan or (which is more likely) remember these dudes from the heyday of nu metal and pop punk. They don't disappoint in the live show, either. Audience interaction is a must at an Alien Ant Farm show (just don't pass up any joints, the dude does not smoke -- he's a young father, after all). Be ready to dance, mosh, or just flail around soaking up the fact that you're most certainly more than a decade older than you were when Alien Ant Farm first won you over with their pop punk alternative jams. 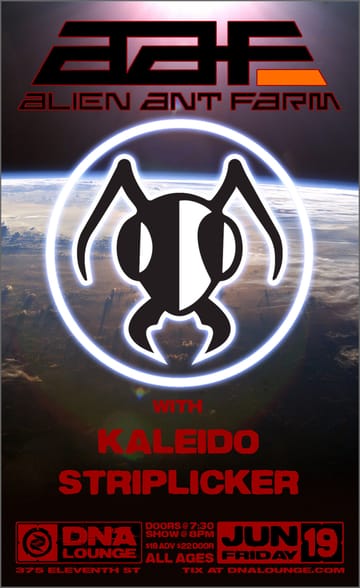