Jesika Von Rabbit
Night Club
Pretty, Handsome
Vice Reine
How can you not fall in love with a girl who rhymes John Ritter with "apple fritter", and "soy sauce" with Kate Moss over a bed of dreamy, airy electronica? And there's plenty more lyrical whimsy where that came from. Precision beats, synthy sounds, and dreamy layers make an excellent playground for Jesika Von Rabbit as an indie disco chanteuse. Songs like "Gaydar" give you not only a sweet rhythm, but also some humor and a look into the artistic temperament of a Wisconsinite who escaped the mid-west and ended up stuck in the desert. Jesika Von Rabbit has taken a few steps to distance herself from the much-beloved Joshua Tree trio Gram Rabbit, but her creativity and uniqueness -- which was a vital part of the band's popularity -- is as strong as ever. The Von Rabbit live show is a spectacle, not yet on a Miley Cyrus scale but with just as much energy and weirdo vibes. Jesika is stationed behind her trusty keys, wearing whatever fancy thing she wants, with arthouse backup dancers on each side. The woman can belt out a tune. After a dozen years as the leader in a band, her new found freedom is a treat for all of us, in the form of smart, catchy songs that will heat up the dancefloor.

Night Club is an electronic pop duo from LA featuring Emily Kavanaugh (vocalist) and Mark Brooks (producer). Brooks and Kavanaugh began writing dark synthpop songs together in 2011. Although Brooks comes with a lengthy pedigree in performing/DJ-ing (Warlock Pinchers, Foreskin 500, Le Pimp and MegaJive), this marks Kavanaugh's first entrance into performing following in the steps of her father, Kevin Kavanaugh (keyboardist from the legendary New Jersey band Southside Johnny and the Asbury Jukes). 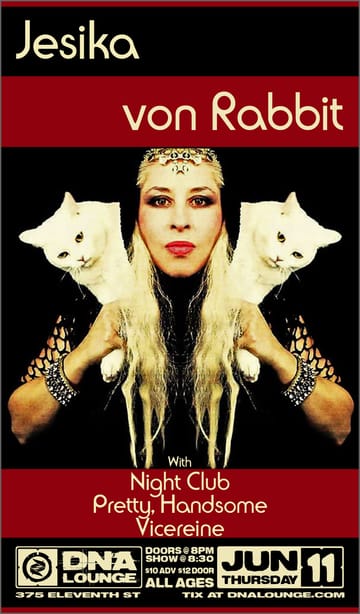 Gram Rabbit: Off With Your Head
Night Club: Poisonous
Jesika Von Rabbit: You Drive Me Ape