Both rooms are open, with staggered starting times!

In Letter Form
Taxes
Fritz Montana
The Frail
Silhouette Era
Beautiful Machines
Los Angeles' (by way of everywhere else) Mansions On The Moon are no stranger to calm, wistful melodies. The band dabbles in plenty of genres in order to get that perfect sound, from chilled-out indie to tranquil electro to straightforward pop. The band formed back in 2011, and has been steadily growing their fanbase with touring, close ties with pop music mover and shakers (like Pharrell Williams and Diplo), and their musical evolution. They've even made official remixes for big artists like Foster The People. Mansions On The Moon weave the best of pop music together to craft tunes that you can sway to in the middle of a frantic audience -- or that you can contemplate on during your long BART ride to the city. Singer Ted Wendler uses a dreamy falsetto to lull the listener into the web of Mansions On The Moon -- a web that is only made more resplendent by strong indie penchant for intricate songcraft. Synth fueled songs are perfect for getting lost in, and Mansions On The Moon has mastered the elements of divine non-chalance: they give you everything (great drums, synthy pop, ethereal ambience, excellent vocals) and yet do it with ease; like they don't even have to try. Seriously, the band's cover of Mazzy Star hit "Fade Into You" is nothing short of trance-inducing. Live, the band transports listeners through an otherworldly experience: soft lighting and soft pulsating beats swirl with abandon, while acoustic and electric guitars, keyboards, bass, and drums work together to form an easy-going indie electro pop dream.

Breakdown Valentine: Leave it to San Francisco to produce an orchestral synth pop masterpiece in the form of Breakdown Valentine. The energy coming from every track swirls and swoops down from some airy place to get forever stuck in your head -- Breakdown Valentine is hypnotizing. Dreamy vocals, pulsating electronics, and devastatingly good beats are all reasons to close your eyes and just let your body go with the flow during a Breakdown Valentine show. Olivia, the band's female vocalist, has a sultry, low voice -- a perfect complement to the heady, dance-y compositions by her bandmate and guitarist Allen Davis, formerly of Every Move A Picture. The two singers trade vocal duties and add backing vocals to each catchy electo gem. The band formed as a long distance writing partnership and culminated in Davis moving from Portland to SF so Breakdown Valentine could thrive, and impress live audiences with their slightly dark, very synth pop sound. Part tragic, part romance, and part catchy pop, Breakdown Valentine is a splendid electronic act in the vein of Glass Candy or Chvrches. Stunning and soulful, the live set adds a drummer to give the songs a perfect beat and encourage at least a little swaying.

The Trims are here, so you know it's time to dance. The indie dance band hails from our southern neighbor, San Jose, and brings beats, smooth low vocals, and a fast, catchy sound that is sure to ensnare you upon first listen. Think Pulp or Franz Ferdinand, with a take on rock and roll that includes not only upbeat drums and bass, but also some very well placed handclaps and excellent backing vocals to add some youthful yelling energy. As a live band, the Trims makes their presence known with a lead man who croons and dances a la Ian Curtis and musicians who gleefully groove to the beat. The band has already brushed up against the big time, with MTV using the song in an episode of The Real World -- "Out Of Control" provides a great big ball of fun, with those aforementioned handclaps hidden between well-crafted electro synth pop beats. The Trims are nothing if not fun, with lyrics touching on all things sexy and heartbreaking. The five piece definitely has an ear for Brit-pop inspired melodies, but with a contemporary electro rock spin that is infinitely good for dancing and acting like youngsters.

High energy pop, sexy indie, and alternative rock mesh seamlessly in the Bay Area's The Hundred Days. This four piece met a decade ago and decided to enter into a rock and roll experiment, meeting every day for 100 days to work on music, crafting perfect little pop songs that are ready for the radio. The band layers guitar, pounding drums, and electronic sounds to prop up singer Jon Smith's diverse vocals. One minute they're channeling Marc Bolan or the Talking Heads, the next a slightly winsome Arcade Fire; either way, you're going to dance. The band's irresistible indie pop is made for moving your feet -- with songs like "Famous Overnight" describing any young band's dream journey to fame in the catchiest way imaginable. Live, the bespectacled bassist pulls double duty manning a rig of synth and sound machines, while dual guitars create a wall of rock. Towering guitar sounds and a complex array of electronics make the band's sound possible. There's wave after wave of catchy pop tinged with a little post-rock complexity and even some darker indie moments to keep it all interesting. You never know exactly what you're going to get with bands like The Hundred Days, but one thing is certain, you'll want to throw your whole self into feeling the music.

The Frail ain't your average pop band. Sure, you want to instantly dance to their inspired pop gems, but there's more to it than that. Damn good bass lines mix with beats and killer vocals to make for after party worthy classics, and gripping songwriting and lyrics make The Frail more than just a party band (though, fun is the name of the game for these dudes). The foursome found each other on Craigslist and soon realized their affinity for pop delights could turn into something real; ah, the oldest band love story around. It's only been a few years since their initial release, but these guys have opened for the likes of Hot Chip, Neon Trees, The Teenager, and Goldfrapp. Not too shabby for a Craigslist find. The band likes to push the pop music envelope, pulling from rock and roll style to classic R&B sounds. The Frail aren't afraid to strut their stuff live, either. Watching the singer swagger and sashay across the stage is pretty easy to do, and the voice that comes out of the mic is a compelling call to dance. Get ready to soak the dance floor with sweat and spilled booze.

San Francisco is no stranger to soul, and Fritz Montana is harnessing that soul to make bluesy indie rock that you can dance to. Rock and roll indie blues meets the pop world with Fritz Montana's song craft. It's fun and unassuming with driving rock beats that are irresistible to both music nerds and people who might accidentally walk in on this band at your favorite dive bar. Think your very own local Black Keys, ready to keep your head banging and toes tapping. The trio has only been around for two years, but the band has already put out two releases and they're winning over crowds with rowdy fun rock. Catchy guitar riffs, effective rock rhythms, unpretentious rock lyrics, and a sex-soaked vocal make Fritz Montana a perfect choice for your roof top kickback or your basement rager. This music will hit you where you live: heart, soul, and ear drums. 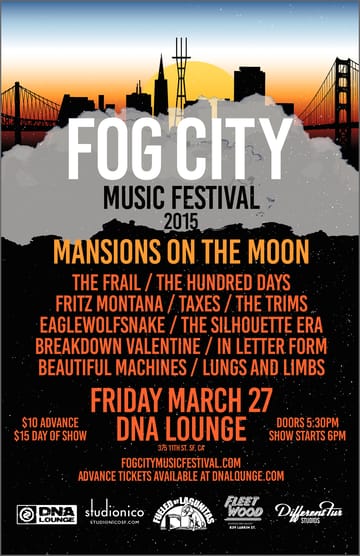