Together We Are Robots (SF)

Doctor Popular (SF)
Mr. Smith (SJ)
If you want a taste of what it would be like to live inside an old Nintendo Gameboy, Together We Are Robots is here to serve it up strong. The band, which consists of seemingly opposite acoustic guitar and laptop experiments, is the best of indie music meets gaming -- think a less grizzled Tom Waits playing his favorite games in an arcade while drinking a craft beer. The band hails from San Francisco by way of Calgary, and has been writing and composing chipmusic with two classic Nintendo Gameboys since 2008. Add some guitar, drums, and personal stories, and you've got quite an ear pleaser. These boys have made their way through the Bay's 8bit scene, embracing not only the classic video game noise but also retro electro sounds with a folk-punky spirit. Together We Are Robots' Mike Ackman writes lyrics that are confessional ghost stories, but with mass appeal due to finely crafted lo-fi instrumentals of this brand of chip rock. It's more than a little nostalgic, but the H.P. Lovecraft meets Mountain Goats meets chiptune appeals to grown up gamers who take brewery tours, and anyone willing to listen. Mike is joined by Devin Nixon to flesh out the live sound, adding drums and effects. There's definitely an aura of punk that pervades this Gameboy music, making Together We Are Robots a perfect music live experience for both kinds of fun lovers -- the nerd and the punk.

Doctor Popular is a name synonymous with the 8bit art culture in the Bay Area. His sounds come from all corners of the nerd world -- circuit bending, video games, iPhone composing, and really whatever experimental noise he thinks will delight your ears. Not only does he play a mad DJ set, the Doc is also a yo yo master, an art creator, and video game designer; and he's the perfect choice to curate tunes for a crowd of fun loving game enthusiasts who want to destroy all presets. Expect catchy, weird, and nerdy sounds that will make you get down on the dance floor.

Mr. Smith is a DJ hailing from the San Francisco Bay Area, who plays all the chiptunes, industrial, and EDM a gamer could ask for. Mr. Smith started as a concert promoter by organizing Industrial/EBM/Powernoise shows in the Bay Area, and has co-produced a ton of events. These shows included acts such as 16volt, Hex Rx, Chemlab, Babyland, Accessory, Alter der Ruine, Nachtmahr, and Dismantled. Mr. Smith is a resident at 8bitSF, Club Apparition, and has also held residencies at Club Surgery in Menlo Park, and Anthem! in Sacramento. 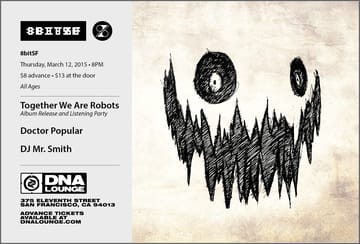 Together We Are Robots: A Thousand Hounds
Doctor Popular: Rumspringa
Past related events: