Mr. Smith (SJ)
Smart, ambient, chipmusic comes from all parts of the world -- even San Diego. Despite what Space Town Savior, AKA Patrick Trinh might say on facebook, this is music you can dance to (or just sway when the pace is leisurely), with all the ups and downs of a compelling score. At times dark, Space Town Savior combines elements of old school rave in a new chiptunes kind of way -- like a rave in space played on a bunch of Gameboys -- but it's more than just that. It's all about playing with the rhythms for Space Town Savior.

The Bay Area's own E.N. Cowell is a graduate from the school of old computers, anime, comics, movies, and surreal scifi. He forges future sounds with a hard throwback to his childhood imagination. Perfect music for a gamer with a craving for nostalgia that you can move to, or a dancer who just wants to let loose with some minimal, beat-driven EDM. E.N. Cowell is the kind of babyfaced graphic designer you might see every day on BART, hiding his musical prowess in plain sight under the guise of lowly tech dude. But give him a synth and a computer, and you've got some real magic brewing.

Mr. Smith is a DJ hailing from the San Francisco Bay Area, who plays all the chiptunes, industrial, and EDM a gamer could ask for. Mr. Smith started as a concert promoter by organizing Industrial/EBM/Powernoise shows in the Bay Area, and has co-produced a ton of events. These shows included acts such as 16volt, Hex Rx, Chemlab, Babyland, Accessory, Alter der Ruine, Nachtmahr, and Dismantled. Mr. Smith is a resident at 8bitSF, Club Apparition, and has also held residencies at Club Surgery in Menlo Park, and Anthem! in Sacramento. 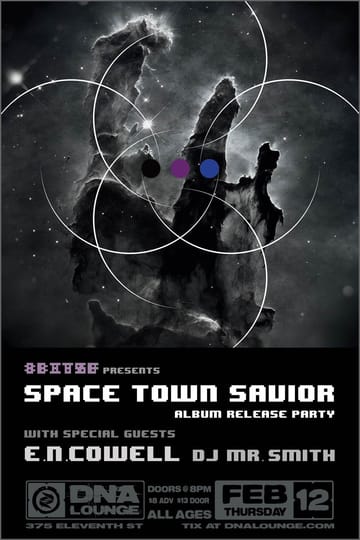