Upon a Burning Body: Since 2005, San Antonio's Upon A Burning Body has been bringing their ferocious metal concoctions to the masses. From frenetic solos to more groovy riffs, Upon A Burning Body has taken the best of the death core and groove metal subgenres and made something entirely their own. Although the music speaks for itself, with the band twice landing on the Billboard 200, Upon A Burning Body might be best known for a publicity stunt where they claimed their lead singer had disappeared (much to the sadness of their more-gullible fans and label execs). But now they're back to set things right, and hopefully make everyone forget about the hoax gone wrong. Vocalist Danny Leal summons a mysterious beast with his disturbingly violent vocals, a guttural growl along with some clean vocals, all supported by furious drumming and persistent instrumentals. Unlike a lot of bands with similar sounds, Leal manages to make each line growled intelligible, so listeners get the full intent of the music with no need to look at a lyric video just to figure out what he is screaming. With a name like Upon A Burning Body, you already know this stuff is going to be dark, and with lyrics like "I'm no stranger to place where demons wait," and "don't ever come at me again," Leal makes certain that we realize this is not a band you want to mess with. The four-piece has recently expanded on their harder sound, adding in some cleaner vocals and cinematic flourishes -- a great risk that has paid off in a big way. Fans of deathcore, melodic metal, and plain old new metal will be impressed at both the risky experimental stuff, and the brutal heaviness of the live show. Live, these four Texans do not hold back. Expect crowd surfing fans, lots of interaction with the audience, and fun, rowdy metal.

Veil of Maya: Deathcore is the name of the game when you are Chicago's Veil of Maya. This four-piece brings it loud and brutal, with plenty of decibels to mess up your hearing. Veil of Maya is more than just regular deathcore -- they add elements from an array of metal subgenres, from technical death metal, to some progressive pieces, and even a little melody. Crisp production, quick songs, harsh vocals that go from a high scream to a low growl, and amazing guitar make the band a joy to listen to via headphones; and a captivating live show ensures that seeing Veil of Maya will be a night you won't forget. And of course, the breakdowns rule it all! Drummer Sam Applebaum and guitarist Marc Okubo started Veil of Maya in 2004 (the band formed from the ashes of defunct nu-metal act Insolation) -- that means they have slaved away for more than a decade to perfect this brand of metal. Pounding drums, layers of complex guitar and bass, and new vocalist Lukas Magyar make Veil of Maya a huge act in the metal scene. Magyar has only been with the band since late last year, but he's held his own and is ready to be tested on the huge Slow Your Troll tour. Veil of Maya wants their listeners to see the truth, peak through the illusion of life, and reach nirvana -- and when you see them take the stage that just might happen. 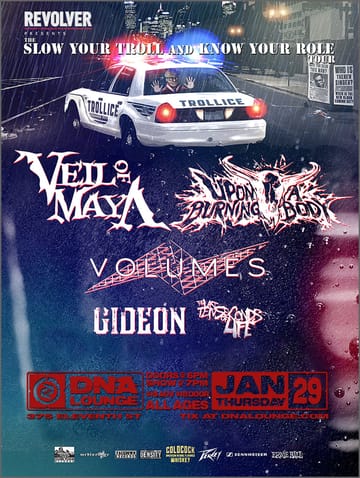