Vismancienne
Noukon
Gnarboots is a trio with punk roots, a die-hard following of gamers and self-proclaimed nerds, and a creepy sense of humor. The band formed a few years ago in the petri dish that is San Jose -- and have had to work hard to buck their reputation as a joke band. Despite the fact that Gnarboots is fun and hilarious, these are serious musicians -- one of them even broke John Dwyer's guitar during one of his shows; that's pretty serious/rad/a happy accident! The fact that Mike Park of seminal punk label Asian Man Records took notice should prove that Gnarboots is real, and ready to make some devastatingly good tunes. It doesn't hurt that Adam was once in Bay Area punk group Link-80, either. They oscillate wildly on record: from chiptoons, to fun ska, to brutal yelling punk, to classic pop, to dark wave synth rock, and basically anything else they feel like -- which means who knows what you'll see at a live show! Recently the band has taken a pretty dark turn, so likely audiences will be treated to a masterfully woven live show of synth punk musings on mortality from the POV of a sad clown, with a few fun classics thrown in -- but with a band like Gnarboots who are known to do the unexpected, you can never be sure.

Striplicker is the dark brainchild of crashfaster frontman Morgan Tucker. Mixing elements of minimalist electro with bleak, industrial overtones and danceable beats, Striplicker aims to infect your ears with hooks plucked from the black, mechanical heart of a future ruled by fascist robot overlords. Join Striplicker for its inaugural show featuring the pounding percussion of Devin Nixon and the blistering, rage-filled guitar work of Jamie Cronander.

Robo Beat 'Em Up is Pink Thunder and J.A.E.. Time travelling storytellers, documenting the downfall of man and warning of their impending doom. We are the future of your past world. 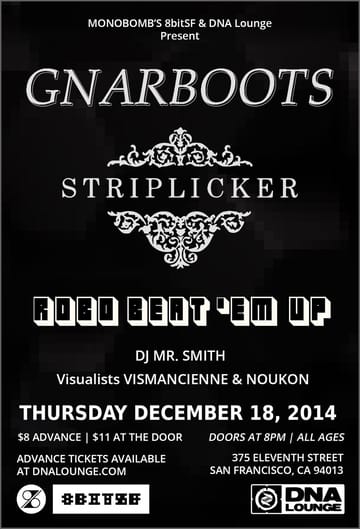