Before The Mourning
Requiem
Malaki
Limnus
Killset
Manisfestiv
Los Angeles is bringing us a new dawn for heavy music with the melodic metal band, Before The Mourning. The five piece has only been around for a few years, but have already made a name for themselves both in California and across the nation with opening gigs for This Moment and Butcher Babies. The music is, obviously, kinda dark. With themes such as depression -- one that was spurred on by a failed engagement -- self-medication, self-loathing, and life's darker moments. Singer Adam Ryan (who probably would have a lot to talk about with fellow metal fan Ryan Adams) wields his voice and lyrics like a trapped animal. Growling, guttural words sputter forth, followed by prolonged, low pitch yowls that are aimed to do the most destruction. Then suddenly, everything changes and smooth, clean vocals break in for just a moment before a return to the anguished depths. Sweat pours from every band member as they tackle the heavy tunes and tones, with blast beats, quick rhythms, and incorporate the more melodic elements of metal. The energy is palpable, and audience members will be quick to note that Before The Mourning's aggressive energy is almost punk rock in nature, with subtle nods to the great metal legends of 80's. Get ready to throw your body around, flash your Pantera shirt, and throw up the devil horns for Before The Mourning.

Santa Cruz may not be the first place that comes to mind for dark metal, but it certainly has been a great incubator for Requiem -- an almost pop-punk assault of heavy music. Amazing clean vocals are propped up by soaring guitars, catchy melodies, and guttural screams. The best thing about this band is the male-female dynamic, which sets Requiem apart from the scores of other black-wearing, heavy music making, metal-genre bands. Singer/guitarist Jacklyn pulls double duty and manages it with ease, lending her voice to the other two vocalists while doing her best to be Hendrix. The band's tunes are radio ready, and their goth look will only help to ensure that all stripes of punk and metal fans -- from Cure-loving to Panic! At The Disco worshiping -- will hop on board the Requiem train. The band, which was at first a trio called Requiem For The Dead, started as the brainchild of I Am Ghost's Steven Juliano after his former bands fell apart. When he found the two remaining members, including Jacklyn and power drummer Rick Siegfried, Requiem took its current shape as a punky, metal, hard rock band. They just feel right -- as is evidenced on stage every time they play a tight, together, fun set. Requiem walks the line between all out seriousness, and a little fun here and there, as evidenced by track titles like "Where The Hell Did The Romance Go?" and "Say Hello To The Devil For Me." A little levity, a whole lot of collaboration, and heavy rock and roll makes Requiem a must see. 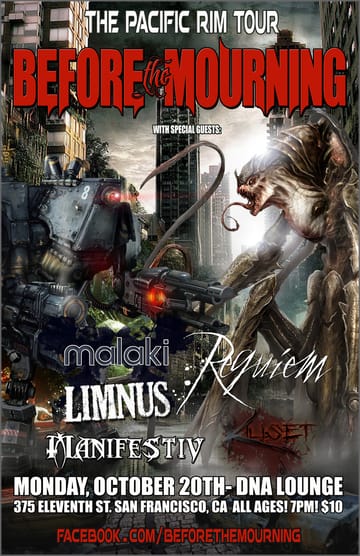