Guttermouth
Voodoo Glow Skulls
Against The Grain
Jokes For Feelings
Huntington Beach has been a hotbed of music for decades, especially for the California punk sound that eventually fought its way into the mainstream. One of the original pop punk legends, Guttermouth, sprung from this scene. Formed in 1988, the band has toured constantly -- pleasing both hardcore old school fans and new fans that weren't even born when the band first started punking around. Guttermouth stays true to the punk scene, even after 26 long years with power chords, hilarious lyrics, shock value, and high energy pop punk. Guttermouth, so beloved by SoCal locals, was the first band to release an album on Dexter Holland's indie label Nitro Records. Singer Mark Adkins does his best to make the audience blush, or at least laugh nervously, as he hurls insults, confronts security, and combats the boring while he marches across the stage, yelling and singing. Guttermouth has years of material to draw from, but expect fast-paced, catchy pop punk no matter what -- the band never strayed too far from their punk roots (thankfully), unlike other old school bands who experimented with everything from more serious hard rock to reggae and failed. Guttermouth simply do not care what you think. They want you to mosh. They want you to have fun. But they aren't changing for anyone. Always outrageous, always punk, and always a good time to be had at a Guttermouth show.

Out of the desert of Riverside came the Voodoo Glow Skulls, one of the original ska punk bands that hit the California music scene hard. They have all the markers of a great punk band: formation in the late eighties, releases on Epitaph, and oh yeah, horns...lots of horns. The Casillas brothers had almost all they needed to start a punk band: a singer, a guitarist, and a bassist. Add a drummer, lyrics in English and Spanish, along with a horn section, and you get an instant ska-core classic. More punk with horns than anything else, the Voodoo Glow Skulls bring an old-school approach to the stage even now -- the six piece has far more energy than some younger punk bands coming out these days. Taking cues from the great Fishbone and likeminded SoCal bands, VGS began making an energetic, upbeat punk sound with lightning speed drums and guitar, horns to tie everything together. The Voodoo Glow Skulls has been crafting their image since 1988 and have decided to stick to what works: imagery that draws equally from horror movies, Mexican wrestling, skateboarding, and Catholic iconography. It's a pretty common sight to see an old dude rocking a VGS shirt from the 90s next to his now grown kid in a newer shirt. People love what the band stands for (familia, old school punk, and fun) just as much as they love the punk with horns sound.

If you want to have a good time, look to Jokes For Feelings to make it happen. Jokes For Feelings are a loud, punk rock, ska that rep the East Bay hard and even have their own anthem, "Mushroom Cloud," that name drops their members and popular Bay Area bars. Short snappy songs with everything a punk could possibly want: tiny bass solos, big horns, bad attitudes, and yelling. And of course jokey fun -- when Jokes For Feelings say "Fuck You" they probably really mean "I love you," right? Right. Songs about lost youth, mushroom clouds, head trips, and all around punkness set the pace at a rollicking ska stomp. Don't get in the way of this wave of sound, just let the music take you where it wants. The band would be right at home in an Oakland house party getting arrested as they are in the club. Snarling vocals and raucous beats and lyrics lay atop a whirlwind of ska punk. The band has seven members, making it easy for them to cultivate that authentic punk ska sound from days past -- plenty of horns to go around. Be prepared to skank your way around the dance floor. 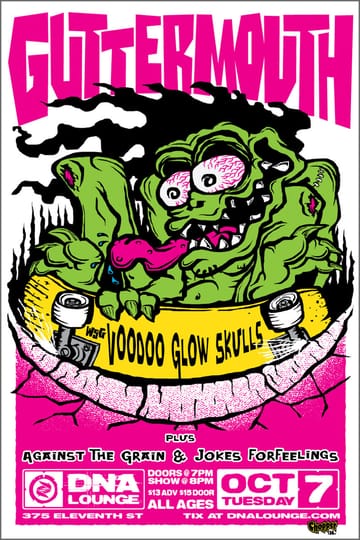