Through The Roots
The Supervillains
The Steppas
Through The Roots Lazy waves of sound wash over your ears. Lights dim and brighten. A puff of smoke emerges from somewhere unknown. Through The Roots has hit the stage. Using rasta rock motifs along with electronic components, the San Diego band has created the perfect California reggae sound -- urging your body to just get loose and let the music take it over. Dancing is a must, whether it's a slow jam sway or a hyper reggae-ready pogo -- all the band members constantly bounce and smile. Singer Evan puts on his best Cali-reggae cadence, the stilted patois of stoners and UC students alike, as he slides through verses and choruses never once losing grip on his chill persona. The vocals lay atop a bed of crunching reggae beats guitar, drums, and synths -- which aren't always included in reggae rock but make a perfect addition when it comes to Through The Roots new twist on the genre. The band has been performing since 2008, and their practice shows. On stage the five piece is a tight musical brotherhood (sometimes sharing the stage with extra performers, such as horn players or female singers), hitting all the right notes with massive energy while urging the audience to stay positive and vibe out. Don't be afraid to shut your eyes, raise your hands, and let your body do what it wants.

The Supervillains aren't villains at all -- they're heroes of rock, bringing melodic punky reggae to the masses with joy. Songs overflow with innuendo and musings on drugs, love, and life, set to the delightful rhythms that are sure to get even the toughest audience member dancing. Horns, jangly guitar, powerful drums, and an amazing vocalist come together to form The Supervillains' upbeat ska sound for fans of stoner bands like The Expendables or old school punks like Reel Big Fish. Both singers have the reggae/ska vocals down, and one of them plays drums and sings at the same time, while the other rocks the guitar and some mighty dreds. The musicianship is tight, both live and on record, and you can see during the stage show that these dudes know riff off one another. It might be easy to ignore the level of musicianship amidst songs about chronic, partying too hard, and pretty girls, but The Supervillains blistering punk side won't let you. Typical of the genre, these guys have fun on stage, and bring along a great sense of humor -- just check out their spot on ska cover of George Michael's "Careless Whisper." The Supervillains are as fun as a smoke-filled, beer drenched dorm -- and they might leave a trail of destruction just as big because you will not be able to forget this Florida four-piece once you've heard them. 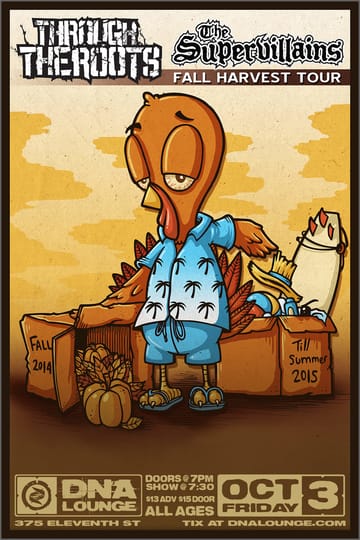