In The Whale
Cadaver Dogs
The Skinny Guns
In The Whale: Rock bands of late just aren't as fun as they used to be -- sure they look cool, and make a lot of unique sounds, but much of the rock game has lost the excitement made it appealing in the first place. In The Whale is curbing that trend. With plenty of power chords, shouted words and "woos," tongue in cheek lyrics, and a weird Frank Zappa meets Stan Ridgeway sound, this duo keeps the toes tapping and the heads banging. The music isn't complex, but it's powerful, loud, and above all catchy. You'll be singing these tunes after one listen. Small town Colorado boys Nate Valdez (guitar) and Eric Riley (drums) moved to Denver, and fomented the sound of In The Whale, drawing on rock, blues, and a punk rock attitude. The two dudes bring a whole lot of raucous energy to the stage, more than you'd think possible. Sweat flies and drums pound, and you probably will think you've entered a 50's blues revivalist rock show for a song before being transported forward a few decades with some grunge-era sounds. In The Whale pulls on such a diverse array of influences that it can be quite an experience to ride out a whole set, but worth for the sheer amount of fun. All of it mixes and blends to grow into something captivating and original. In The Whale has curated the perfect balance of heavy grooves and good humor, perfect for stoners, music snobs, and people who just want to let loose.

Hailing from humble Ohio comes Cadaver Dogs, a band that is anything but humble. Loud, bombastic, sometimes covered in glitter, and all the time worshiping at the alter of Rock and Fucking Roll, this Columbus Ohio twosome is ready to kick you right in the ear drums. The band has a penchant for "Too Much," and they aren't afraid to make it known with their over the top blend of rock and roll, metal, and bad attitudes -- and a fu-manchu mustache just as a hat tip to rock god Lemmy. Heavy rhythms and grooves, dirty yet sexy lyrics, and hard rock make Cadaver Dogs ready to take over, especially if you're already on board with the sounds of Queens of the Stone Age (but with much less of stick in the mud vibe). Singer Matt has a voice that would be perfect fronting a jean jacket clad 70s rock metal band, or a NIN tribute band -- it can soar and growl and it sings songs that will make you blush. The band is known for an uncontrollable live show -- part T-Rex loving glam super show, part dirty dirty basement punk show, and all out rock and roll fun. Watch out for flying objects, including your fellow audience members who have just lost their minds because of Cadaver Dogs. 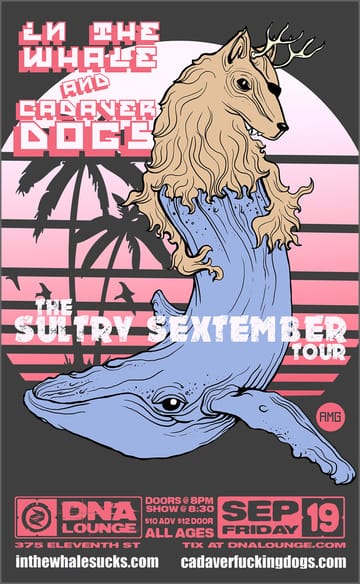