Toy Guitar
Travis Hayes
Divided Heaven
Dead Frets
The music of Toy Guitar is sweet, upbeat, and undeniably punk. The Bay Area band might be relatively new, but their jangly rock sound is reinforced by a background in music. The foursome is second home to two punk legends in their own right: Swingin' Utters' and (the much beloved) One Man Army's Miles Peck and Jack Dalrymple. That makes toyGuitar just one step away from Green Day...talk about classic Bay Area punk. The foursome is fast, loud, and simple, and packs enough fun in their live show to satiate the appetite of any punk. Drummer Rosie holds down the beat while the boys in the band sing about love, do some major shredding, and blast a wave of positive vibes into the crowd. Jack's songwriting manages to incorporate a lot of meaning into easy to love pop punk grooves; it's the punk rock equivalent of hiding healthy vegetables in something that actually tastes good. While the band favors a positive, garage rock sound and style, the pop punk roots are quick to shine through with plenty of joyful yells, simple fuzz, and laid back vocals. To further cement toyGuitar's punk rock cred, the band recently joined the stellar roster at Fat Wreck Chords which isn't surprising since the Swingin' Utters also called the label home. ToyGuitar's set is the perfect opportunity to channel your high school punk rock self: get ready to swing your body around the dance floor, no matter how old you are now!

Rollicking riffs, disturbed lyrics disguised as sweet indie rock, and a perfect set of eyebrows come together to form Travis Hayes, a singer/songwriter straight out of San Francisco (he used to book bands at Thee Parkside, hence the garage/punky tones in his indie leaning folk rock). Hayes' whiskey soaked whispers turn into pained howls in the most beautiful way, accompanied by a lush bed of acoustic guitar, organ, stomping rhythms, and perfect backing vocals. His songs convey more than your average singer/songwriter, as he checks in with his own fading youth, makes references to cannibalism and arson, and woos the ladies with his sweet voice. Each song spins a tale of Bay Area woe, expertly composed by young Travis and executed by his killer band. Hayes brings all his emotion to the stage for every live performance, giving away a little piece of himself to each audience member, more often than not causing them to wonder what exactly happened to poor Travis to turn him into this beast of a performer. It's not every day that you find a storyteller of this ilk, who can capture your mind from the outset.

Divided Heaven is the brainchild of constant traveler, business savvy dude, and musical experimenter Jeff Berman. From Brooklyn to Berlin to his new home of Los Angeles, Berman has soaked up the influences and produced clean cut, punk-tinged, jangly numbers that detail his personal life with catchy acoustic guitar and sharp production value. Berman's voice is reminiscent of the best early emo, the kind that tugged on heartstrings of high schoolers everywhere (Saves The Day, Dashboard Confessional, etc.). The ubiquitous influence of Green Day pervades everything that Divided Heaven releases, but Berman doesn't strictly stick to the alternative whine that makes our inner emo kid rejoice -- he also ventures into indie terrain, twangs his way into alt.country, and even adds some blues worthy harmonica to his set. The music may not stray too far from the pop punk godfathers, but Divided Heaven is plenty of fun -- live and in your headphones. Divided Heaven was a feel good acoustic addition to 2014's Warped Tour, and recently visited Japan -- not bad for a punk kid and his guitar. Now Divided Heaven's sound is expanding, with a new record featuring a full band of talent to work over songs about everyday sadness, love, and vulnerability. Finally, Berman has a full band supporting him live, kicking out jams that are full of heart and emotion. If you find that you aren't able to look away, that means that Divided Heaven is doing the job right.
Photo Gallery: 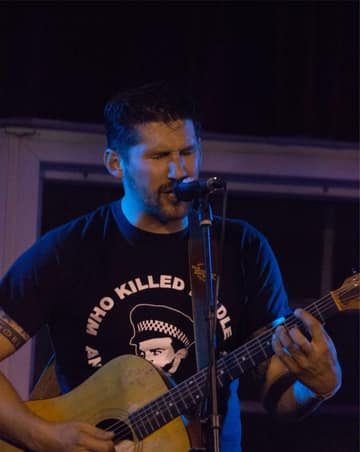 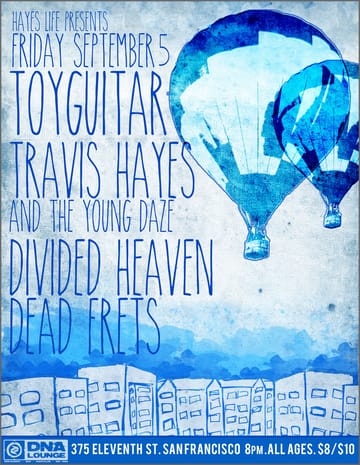