Thaitanium
International award-winning Thai-American hip-hop group Thaitanium released their debut U.S. single "Wake Up (Bangkok City)" featuring Snoop Dogg. This marks a first major release by a Thai hip-hop group in the US. Snoop Dogg met Thaitanium while touring in Thailand last summer. Their collaboration soon after resulted in hip-hop banger "Wake Up (Bangkok City)". Snoop Dogg also stars in the music video, which is set to premiere in the U.S. on August 20th 2014

"Wake Up (Bangkok City)" is the essential hip-hop song for any city, with organically rapped verses over a hypnotic track. Thaitanium effortlessly plays off Snoop's addictive hook, creating a call and response with the rap legend. Together, Thaitanium and Snoop make "Wake Up" a rap anthem for not only Bangkok, but all party cities alike.

Thaitanium began with three members -- Khan, Way and Day -- who helped pioneer Thailand's hip-hop culture. In 2006 they added two members -- Big Calo and DJAYBUDDAH -- the latter runs the USA DJ coalition in Asia representing Heavy Hitters and DJ Whoo Kid's Shadyville DJ's. Since the release of their debut album, Thaitanium has jumped to the forefront of the international hip-hop community, creating a substantial following in Thailand and other countries in the Asian region. With Fortune 500 sponsorships from Toyota, Nike, Honda and Canon, the group already has a number of platinum selling albums overseas. The group has been nominated for "Favorite Artist Thailand" (MTV Asia Awards), achieved "Top 10 Video of the Year" (MTV Thailand) and has accumulated nearly 2 million Facebook followers.

In addition to releasing music, each member of Thaitanium has had individual success on a variety of independent projects including a barbershop, clothing line, film production, modeling and music publishing. They've performed with the biggest names in the music industry including Jay-Z, 50 Cent, Rihanna, Akon and Snoop Dogg. In 2008, they organized the largest hip-hop festival in Thailand The Pan Asian Hip-Hop Festival that brought legendary rapper NAS to Thailand.

Through a pure love of hip-hop culture, sheer determination, and raw talent, Thaitanium and its parent label, Thaitanium Entertainment Ltd., have undeniably ushered in the dawn of a new era in Thai hip-hop and ignited a musical revolution in their hometown. In a land once dominated by glossy pop idols, these proud sons of Siam have seamlessly woven together the complex cadences of their native Thai language with the gritty street vocabulary of American hip-hop. 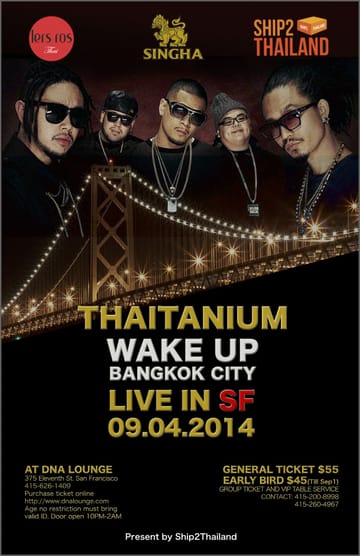