Corrosion of Conformity
Bl'ast
Brant Bjork & The Low Desert Punk Band
Lord Dying
Corrosion of Conformity: Tracing their roots all the way back to 1982, Raleigh's Corrosion of Conformity can claim to be one of the elder statesmen of American metal. Starting as a group of hardcore punk teens, the band evolved into a thrashy, bold heavy metal band by the time the 90s rolled around. They toured with Metallica, had a song on the "Clerks" soundtrack, and even managed to snag a Grammy nomination for Best Metal Performance in 1998. Yet Corrosion of Conformity never lost their edge -- they even managed to make it a bit sharper during the 2000s, when the band dropped their critically acclaimed album "In The Arms of God." Despite ups and downs, slight forays in Southern metal rock, and lineup changes, the main trio of Woody, Mike, and Reed are finally back together, bringing Corrosion of Conformity full circle after the thirty years this band has existed. Yes, the vital 80s version of the band that speaks to the inner punks in all metalheads is bringing the noise to the stage.The boys are back -- releasing a new album, "IX," which is bursting with drum blasts, heavy riffs, and that undeniable energy that makes COC more than just a metal band. Rumbling grooves permeate the chaotic, frantic metal which changes to slower, heavier jams at a moment's notice -- the band knows how to use all of its material to create the perfect set. Fans from any era (but especially the early "Animosity" fans) will be able to let loose, create a circle pit, or just enjoy the music.

Santa Cruz's Bl'ast! (Blast, for those of you confused by the punk as hell styling) is a heavy metal icon -- and they do much more than that heavy metal stuff. The band, which formed in 1983 allegedly from Thrasher magazine wanted ads but more likely from the active Santa Cruz punk scene, pulls on a ton of different influences, from punk rock to hardcore to surfing and skateboarding. Blast is a perfect way to describe the four piece -- who turn out a heavy but still fun assault to bombard your ears. In a weird twist of fate, the band's latest record was found in an abandoned storage locker decades after its initial recording, and then mixed by friend and fan Dave Grohl. Now, more than thirty years later, when Bl'ast! hits the stage you can still see the soul of these punky skater kids fueling these older and wiser metal dudes. The reformed Bl'ast! consists of original members Clifford Dinsmore and Mike Neider, who have tapped two Queens of the Stone Age members to fill out their rhythm section. The lineup works -- after at least a decade of silence, Bl'ast! has found that perfect live band to bridge the gap between punk energy and heavy metal technical prowess. The band is ready to direct their surf-and-destroy rage straight to the crowd. Singer Cliff prowls the stage with his microphone, yelling, while the rest of the dudes channel their riff-oriented inner teens to make a lively blast of sound aching for the glory days of Thrasher and punk, but with a dark edge.

Brant Bjork & The Low Desert Punk Band: Drummer and songwriter Brant Bjork is known for many things: making the Palm Desert a music mecca, founding and giving Kyuss their name (yes, it's a Dungeons and Dragons reference), playing in Fu Manchu, and being a prime mover and shaker in the stoner rock genre. With Brant's new musical pursuit, Brant Bjork and the Low Desert Punk Band, you can add another thing to the list. Although he was about ten years old when the rest of the bands on this lineup were already rocking punk clubs, Brant can definitely hold his own. Brant and his punks bring groovy, heavy riffs in the vein of his stoner rock roots, though the live show is part raw punk energy and part classic rock. Despite his notoriety as a drummer, Brant Bjork shines as a frontman. His presence is powerful, his long hair ebbs and flows as he leads his low desert punks through sludgy jams, upbeat burners, and his stoner rock classics. The band aren't lightweights either -- be prepared for a full on blast of stoner rock.

Lord Dying: Portland is known more for brunch and garage rock wunderkinds than heavy metal, but underneath the rainy city's poppier scene is a thriving metal culture that includes Lord Dying. With a name like Lord Dying, it's obviously going to get dark. But this Portland band makes dark and heavy sound oh so good, especially when that duo guitar sound kicks in. Long hair, angular guitars, and heavy riffs for days make Lord Dying a must see for any metal fan searching for a new band to worship. Thrashy, doom-filled sounds with raw, raspy vocals and virtuoso solos -- it's all seemingly endless when Lord Dying hits the stage. Loud, sludgy, and groovy may not exactly be a new combination, but it is one that is a winner. Somehow the band has distilled the best of the metal genres into their recordings, and brings that mix to the stage with reckless abandon. After nearly non-stop touring since their debut was released, you can expect tight showmanship. Stoner rock with a dark side, Lord Dying is a perfect way to get a fix of Matt Pike-esque guitar noodling with the full sound of Mastadon or energetic delivery of straightforward metal. The band can switch it up from fast paced to slow dirge, and still capture every ear in the house. 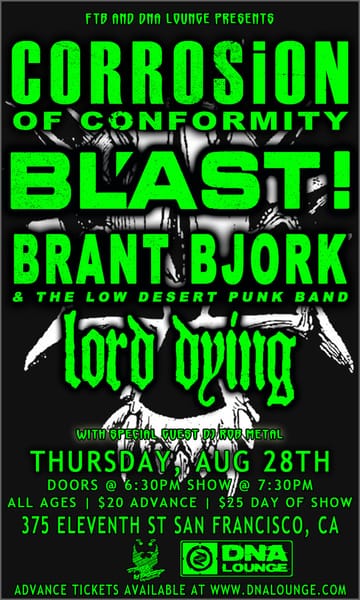