Sponsored by Music Video Race
Cute to the point of being punk, SF's Giggle Party is ready to make some waves after years of producing sweet, edgy rock and roll that you can dance to. These new Bay Area kids have embraced our party lifestyle, turning away from the seriousness that can make creating art a little too dull. Giggle Party doesn't hesitate to call themselves "Party Punk," which brings visions of crowded, sweaty living rooms and DIY shows. And also rowdy kids covered in glitter and facepaint. The band knows how to advertise fun, and uses that ability to attract likeminded party people. The live show is a writhing ball of energy -- everyone sings and yells while bouncing around like sugared-up toddlers. A cover of the Pixies' indie classic "Debaser" gets an electro pop makeover when in the hands of Giggle Party -- the band has a way with synths, though their guitar work is equally awesome. Grab a drink, and a stranger, and get ready to let loose because Giggle Party is unafraid to push the envelope. For instance, the five-piece left everything they knew behind in Texas in order to move to our fair city, and then proceeded to release "This City Smells Like Piss." Which, to be fair, is kinda true sometimes. Choral yells, jangly guitars, solid indie male and female vocals, power pop enthusiasm, make songs about vampires and freaking out enjoyable for just about anyone (trust me, even the snobbiest music snobs will find themselves laughing and dancing).

Powerful, haunting drums accompanied by an almost-spaghetti western atmosphere, crunchy electronics, and sci-fi synths comprise the latest pastiche of genres and sounds from SF's own Doppio. Doppio is a duo, but these two artists work together as one to create catchy soundscapes that are perfect alleyways for a mind to wander through. Live, the boys bring out a guitar and drumset rigged with ableton live to create sonic textures, much to the delight of anyone lucky enough to see them in the flesh. Noisy effects and precision drumming paint a picture over programmed beats; there's a huge amount of sound created for only two people on stage -- from underwater sounding electro rambles to more upbeat 70's dreamscapes. The grooves are endless, the noise is noisy, and the energy between Adam and McKay is palpable. Don't be surprised if you get an improv session that is more interesting and fun than other bands' well-practiced tracks.

Your Cannons makes dreamy indie rock in a haze of whining guitar, bouncy basslines, lots of delay, and psychedelic melodies. The five piece is thoroughly entrenched in San Francisco now, but they traveled far and wide to get here -- with members from Denver, Oxford, and Stockholm. Sultry guitar solos, disenchanted vocals, layers and layers of instrumentals, and a general feeling of gloom via shoegazey lyrics (ex. "that shame won't go away/'cause that shame is yours forever") makes Your Cannons a good candidate to cure summertime blues with spacey rock music. They are a dark yet evocative band for our modern age, working hard to make gloom fun again with appropriately dirge-y song titles like "Filthy Lustre" and "Dust Bowl." Your Cannon's debut album, "Lost In Here," rides the wave from slow building psych rock to revelatory post punk madness with just enough experimentation to keep it stimulating -- it's a perfect rainy day listen. Expect a torrent of solos from each of their three guitarists, methodically rambling shoegaze, and hypnotic musicianship from Your Cannons' live set.

If you've always wanted to hear a Ghost Western band, now's your chance! Callow, a duo consisting of Red and Sami, is San Francisco's premier ghost western act. Sami does double duty creating a haunting layer of keyboard sounds with the occasion kickdrum blast while Red plays guitar and moans out a ghostly tune. Fans of Two Gallants, The Cure, choirs of ghosts, and lost to history blues singers will all be pleased with the sounds that come out of Callow. Both members sing to create dreamy harmonies seeped in some otherly presence. Callow is the perfect soundtrack to hopping the next freight train or camping in the deep, dark woods. Live, the duo set up across from one another, enabling them to work a splendid, avant garde magic while secretly communicating thoughts that only Callow can pick up on. Melodies meander through a wild west filled with whispers and yells, building slowly yet surely into meaningful, powerful tracks. 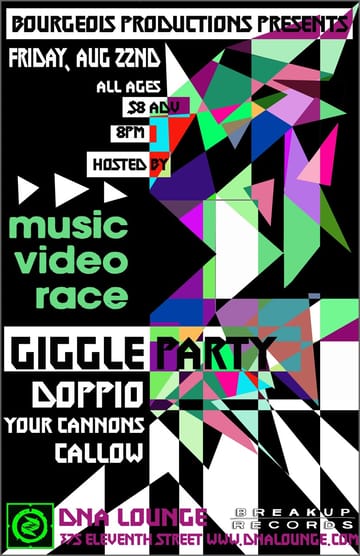