Kat Haus
Tina Belmont
Lady Game Lyric
DJ Cabrini Green
Vismancienne
Wear pink or purple and receive $1 off at the door!
Kat Haus: San Francisco has produced another sweet electr0nic duo for us to devour. And this time, they have a cat theme (or at least a cat facebook cover)! If there's one thing the people can't resist, it's cats! And catchy beats. Kat Haus is dreamy and deep synth pop with female vocals provided by the stunning Libby Tucker. Tucker soulfully sings her pleas and romantic notions over sparse beats and dire synths, melancholy pervades throughout the tracks while the songs build and build. The duo makes some beautiful, moody electronic hazy, and even add in some hardcore elements to pop up unexpectedly at times. The influences seem to range for the duo, of course there's the electronica, but also some shades of R&B and indie to keep us wrapped up in the experience. For the most part, Kat Haus will lull the listener into the odd space between dream and creeping melancholy, but will also allow for some dancing to shake away the blues.

Tina Belmont is a magical girl from a world of rainbows, unicorns, and castles that float in the sky, where the sweet dream of 80's new-wave synth-pop never died, and all music is made on Nintendo game systems. Unfortunately for her, but fortunately for us, she is stuck here in our depraved and disgusting excuse for a world, and has plenty of songs about it to share with us! Her songs about stupid little girls, gothic lolita fashion, secret shame, personal drama, and other disappointments should have something for everybody to relate to, while her overclocked 80's pop/rock stylings will make you want to dance until you collapse! Tina even brought her wonderous music software, "Rhythm Core Alpha 2", to our world to perform with. You can find it in the eShop on Nintendo DSi, 3DS, and 2DS game consoles!

Lady Game Lyric is a song parody writer and singer from San Francisco, CA. She enjoys taking popular songs and rewriting the lyrics to be about her favorite video games. She currently maintains a YouTube channel that features her rewritten lyrics about games like League of Legends, The Legend of Zelda, Pokémon, and Assassin's Creed. Video games made her. So she remakes songs about them!

Vismancienne is a recent visual project of LA resident Leah Oakes. Leah is a graphic designer, photographer, and chip music journalist who is actively involved with 8bitLA and musters inspiration from kitschy pop culture and obscure geeky references. VISMANCIENNE is a cerebral experience aimed at stimulating your psyche. 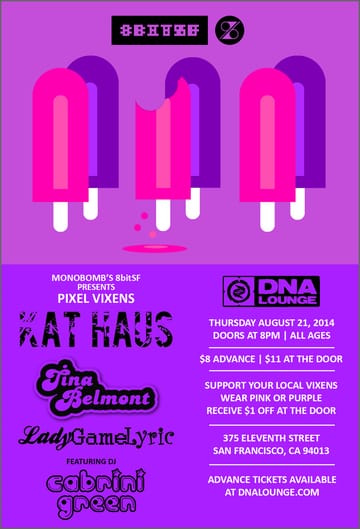