Brasil
Cash For Gold
Memory Motel
Grandma's Boyfriend
Brasil is one wild ride of an indie band, crafting catchy pop gems along with mystifying-in-a-good-way experimental tracks-- not bad for a four piece from Oakland. Brasil can unite unwashed video game nerds, nostalgic grunge kids who were born in 1998, and patch-wearing garage punks (and probably a good chunk of music lovers in between). One moment you'll want to tap your feet and sing along, and the next will be a wave of yelling, super-sweet guitar solos, and pounding drums. The band creates beautifully layered tracks that complement everything, from intense day drinking to a long BART ride home. These boys can stop on a dime, or can jam out, making tracks for all your various moods -- seriously, feel like an alt.country-esque ramble? How about a neo classic rock stomp? Brasil can do it all. It's as if four expert/lifer musicians decided to concentrate really hard in order to make something absolutely perfect, harmonizing with ease against a background of dreamy guitar buzz and finely honed songwriting. Everything sounds big and full with plenty of intelligence and tongue-in-cheek singalongs for those music nerds who love to pick apart songs. Singer/guitarist Jasper Leach channels Eno, gives his best Danzig attitude, and sings with heavy shades of Bowie permeating. Pavement comparisons can't be helped; especially since the band played a whole set of Pavement songs (and released the stellar results, go listen). Live, the band delivers its big sound right to your ears: drums, guitars, bass, and a whole lot of fun. Don't be surprised if the attitude rubs off, and you find yourself dancing with abandon with some stranger.

Cash For Gold: Alright space rockers, it's time to blast off -- there's finally a band that will live up to your dreams and it won't cost you any precious metals. This dreamy three piece is from right here in SF, but they channel many different times and places. Lush harmonies take you back to the girl group era, slightly psychedelic melodies give you the best of the flower power years, and lyrics about burning down the police station -- that's from right now. The trio found each other after numerous band breakups, and immediately found a warm groove they could all enjoy. During their live jams, the band makes a sound bigger than their number should allow -- with full bass lines, fuzzy guitar, and a Velvet Underground-like feel. Cash For Gold makes pretty pop standards, all without losing the gritty edge that years in the Tenderloin gives. Slowing it down for dirge-y, desert stomp tunes like "Mexico," Cash For Gold shines. Repetitive chorus hooks with layered vocal harmonies catch hold in your brain, hoping to shake something loose. 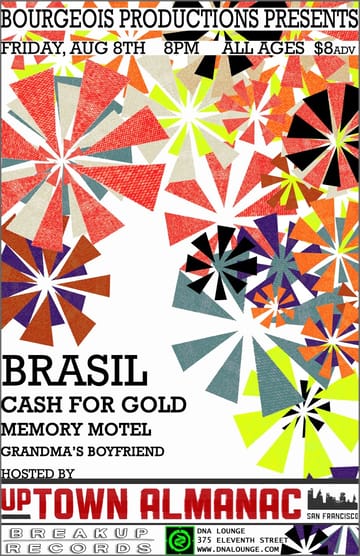