The Body Rampant
Idlehands
Belle Noire
The Soonest
When you hear the crunching guitars, pounding drums, and the high flying vocals of The Body Rampant, you might just realize that you are a witness to the return of 2000's-style emo. Technically, the genre is alternative rock. But if you lived through high school during the first part of this century you'll recognize the Saves The Day, Taking Back Sunday, and CKY influence that these boys have lovingly turned into legitimate, ear pleasing rock and roll. Los Angeles breeds a diverse set of bands, and The Body Rampant is no exception. They have created a concept album filled with small town monsters, past lives, and hallucinations, and mixed it with stellar instrumentals that waver between dreamy and furious pop-punk. It's not every day that a band chooses to make their debut LP into a weirdo concept album that grabs listeners by the brain. The Body Rampant crafts masterful pace, and just when you are about to trance out -- they knock to down with quick, stomping build up. The music is heavy, keeping with the trend that many metal-leaning alt.rock bands are employing -- but never boring. Live, the six piece band shows no mercy. Tight riffs, screaming solos, and catchy, clean vocals make for a ferocious set. Your ears will be ringing afterwards, but you'll be happy.

Idlehands: This four piece alternative rock band hails from San Diego, and adds some California flavor to heavy, emo influenced rock. Front man Johnny O parades along the stage while his trusty trio of rockers hold down the line. Instrumental breakdowns are intricate and catchy, yet not playful enough to take away from the brooding nature of the band -- think Cursive meets Circa Survive. Smooth vocals expand into a yell, but never cross the line into metalcore territory, which alternative purists' ears are probably thankful for. Idlehands is a little prog-y, a little hardcore, and definitely open to mixing genres and sounds in order to get the perfect blend of noise and emotion. The band recently collaborated with Justin Bonifacio of Ghost Parade, for single "Mellow Christ," a catchy, upbeat alt.rock that somehow makes the trumpet (and male/male duets) seem cool again. The live show consists of expressing their creativity through proper bouncing, smooth singing, riffing, and songs about leeches.

Post rockers Belle Noire, all the way from San Jose, bring ambient noise and strong energy every time they hit the stage. The five piece compose intricate songs in the vein of early 2000's alternative. Strong clean vocals soar above the fray of crunching guitars and crashing drums. Singer Joey can hit all the right high notes with ease, as he takes the listener on a journey through his mind -- occasionally, the listener will be treated to an awesome metalcore-type screaming vocal to bring the song home. Belle Noire songs grow and build into a frenzy of expansive rock noise, with sweet "oohs" complementing emotional yells and demanding guitar solos. The band can also turn down the tempo with piano intros, sparse drums, and brooding vocals, before blasting your ears with an all out assault. Fans of classic alternative rock, like Appleseed Cast or O'brother, will enjoy the post rock vibes that Belle Noire brings to the stage. 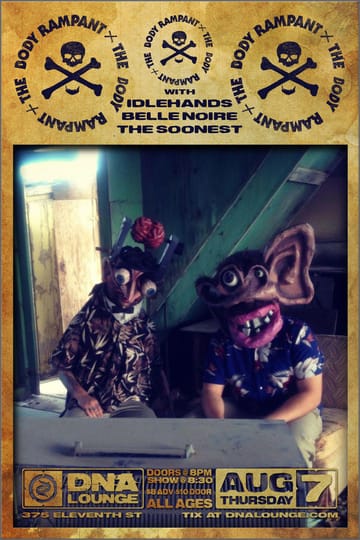