Twin Shadow (DJ Set)
The Limousines (DJ Set w/ live vocals)
Option4
Brooklyn's Twin Shadow gives listeners the best of indie pop and electronica, with a cinematic, expansive sound. George Lewis Jr., the brain behind Twin Shadow's brilliant, new-wave inspired harmonies, began making Twin Shadow music only four short years ago, but the soul jams have touched the heart of music fans of every genre. Whether you want soul, 80's new wave crooners, straight pop, or indie rock Twin Shadow has something for you. The songs build and build, using electronics, effects, synths, and dynamic percussion, until they rumble to a satisfying close. Twin Shadow keeps the tempo at a comfortable pace without it being too slow or boring -- and his looks, well, those aren't exactly boring either. He's a cat with style, and he's not afraid to show it off. Live, Lewis adds keyboards and a handful of members to help recreate his recorded beauty, with layers of vocals, percussion, acoustic guitars, and synth magic. The most distinctive thing about Twin Shadow is Lewis' voice. Seductive, sultry, confident, and arena-worthy, Lewis knows how to belt, whisper, and how to croon with equal gusto. He's like a more arrogant and mystical Morrissey for our generation, but a Morrissey that embraces electro and kinda makes you dance and eyeball the cutie next to you.

Limousines: Good pop fun isn't hard to find in a city like San Francisco. And good electronics are a staple of the San Jose area. So it shouldn't surprise anyone that one of the best electro/dance/rock acts hails from the bay. The Limousines, a duo that consists of Giovanni Giusti and Eric Victorino, have been seen all across the country opening for big name acts like The Sounds and Neon Trees. And for good reason--the duo's brand of fun, heavy on the samples, electronic leaning rock music plays best for an audience that wants to dance. The Limousines are made for our times: they started collaborating via the internet, they have self-released material and videos, and they funded their latest work Hush via an amazingly successful Kickstarter campaign. In fact, Kickstarter enables the group to get rid of the label runaround that the music biz is known for and produce their music, the way they want it. But they aren't all flash. There's a deep-seated darkness and intelligence in the work of The Limousines, be it disguised with beats, synths, samples, and dance ready songs. Victorino, the vocalist and songwriter for the group, is also an established author of poetry with two published works. Live, The Limousines never fail to get an audience worked up. Singer Victorino has serious stage presence, given to prancing once in a while, and hitting a lone drum when necessary for a little extra drama. Some songs call for a live bass for added dance flare. Giusti brings the beats via his synth and drum machine set up. Together they make for a dynamic performance, one that is not to be missed at this year's festival.

Option4, aka Brennan Bryarly of Denver, CO, makes some complex and textured tracks for listeners to go crazy to. Bryarly, working with a Chicago sound despite his Denver roots, knows how to create soon to be classics that heat up the dance floor, without being overly disco or falling back on too many basic EDM staples. Option4's releases are more cerebral than many of his party hard counterparts, inducing a sweet sweet trance that can only mean one thing: a sweaty, fun-filled dance floor. Option4 creates soul-filled originals that build layer after layer of stimulating sounds. Each song seems well thought out and composed, making these catchy tunes perfect for a late night underground or a huge club show. Hooky vocal tracks are layered on top of crunchy beats, hand claps galore, and hypnotic effects -- this is EDM that won't ever bore you. In a time when a lot of artists are making music that sounds dangerously similar, Option4 has transcended the rest of the game. 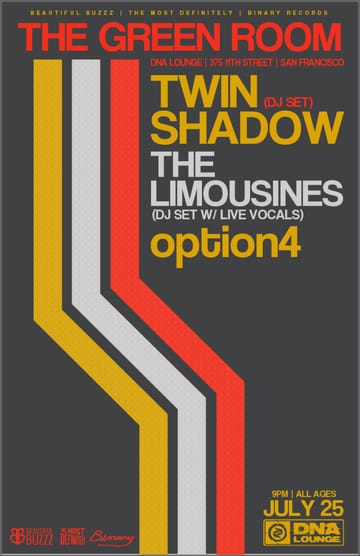 Twin Shadow: Five Seconds
The Limousines: Love Is A Dog From Hell
Past related events: